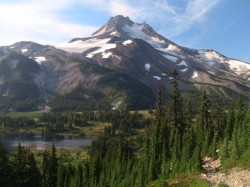 The miles seem to be slow today. When I stopped on a ridge at the border of Hood National Forest, I met a southbound hiker and we talked about Washington. He told me there was a cooler at Olallie Lake (the store has been closed for 2 years), but then dropped the bomb that he drank the last soda and it was empty. He raised my hopes only to dash them a minute latter.

I made it to Shallow Lake (Black's Atlas name) and encountered Pilgrim and his wife (he hiked the trail in '77) having lunch. They packed up as I filled up my water bottles and had lunch. As I packed up, a horse rider with a pack horse stopped to get water for her horses with a large water bag rather then leading them to the lake.

When I reached Olallie Lake, the cooler was indeed empty so I filled up with water from Head Lake. I met Pilgrim again and he confirmed that the store was still closed but may be opened next year. I was a bit behind schedule so I pushed on as hard as my feet would allow. I actually reached my destination a little earlier then I expected and found 2 other campers at Lemiti Creek. They warned me that they snored so I set up camp a little distance away.