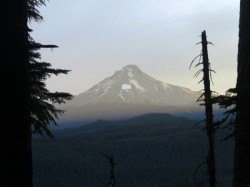 My goal was Timberline so I got moving quickly this morning. The view was dominated by Mt. Hood which was very impressive when I could see it through the trees. I hit Hwy 26 pretty quickly and used the pit toliet at the trail head parking lot. I dumped my trash in the trash can there to lighten my load so I could hike faster. I hit highway 35 next and found a trail register laying on the trail. Apparently there was a cooler a few weeks earlier that was now long gone. I found that I was 3 hours behind Blue Eyes.

As I made the climb up towards the lodge, I ran into Travis whom I hadn't seen since before Old Station. He had jumped up to Cascade Locks and hiked Washington. He just returned to Cascase Locks and was heading south towards Old Station. I pumped him for info on Washington and his resupplies. He told me that he ran into Squatch and some other past hikers at the lodge last night and they let him stay with them and shower. After about 30minutes of talking we parted ways. Near Timberline Lodge, the trail turns to sand and it reminded me of the hiking in the Tehachapi Mountains north of the LA aquaduct where it was like hiking on sand dunes.

Something in Squatches' last film where a guy dramatically quotes John Muir about Mt. Shasta set something off in me. "As I hiked up to my knees through the trail of sand, I fell into such great despair. And I wondered if I would live to see civilization again. But when I spied Timberline Lodge in the distance, it was as if someone injected bacon grease straight into my veins and I felt despair no more."

I made it to Timberline around 12:30 and met BlueEyes hiking out. I was informed that rain was in the forecast for the next 3 days and I was 2 days from Cascade Locks. I went to the all you can eat lunch buffet and then looked around the lodge. I picked up my resupply package and headed out. The views of Mt. Hood were gorgeous. I encountered numerous hikers along the trail. On the far side of Zigzag River, I ran into a family with a dog. The man held the dog so I could go by, but he did so in a narrow part of the trail and when the dog moved some, I instinctiively moved back slightly and lost my footing and slide down the slide until my hands caught the side of the trail. But my leg was banged up some. But fortunately I was alright and hiked on.

I meant to take the Paradise Valley Alternative Route but missed it. Latter after crossing Sandy River, I was about to camp when I noticed a large group camped a little below the site and they seemed loud so I moved on. I ended up at Ramona Falls and found a really nice spot below a large tree that I figure would shelter me from any rain until I could get my tarp out (if needed). I was hoping that the rain wouldn't start tomorrow until after I was packed up so I wouldn't need to set my tarp up tonight.

After it got dark, I heard something on the plastic sheet I use for my ground cloth and saw a mouse/rat in my flashlight. Then I saw another one. They moved really fast for their size. I realized that I wasn't going to get any sleep here, so I picked up my backpack and rolled my my ground cloth with my sleeping quilt and hiked back up the trail about 1/4 mile. Unfortunately the sight wasn't as ideal and if it rained I would need to cover up quicker. In the early morning it did drizzle some and I drapped my tarp over myself using my backpack to hold it up. It didn't last long though so I threw off the tarp before condensation became an issue.