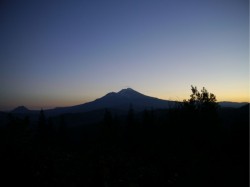 I got up late and didn't get started hiking until 4:45am. However, its less than 12 miles to the I-5 and its almost all downhill. The temperature has finally dropped as well. Its actually in the 60's this morning and promises to remain cooler all day. When its cool and my body isn't stressed by heat, I hike faster which is why I prefer to hike in the early morning. Though there was suppose to be some slight climbing to start with, I didn't notice it at all. It started off feeling flat and then finally started to descend the rest of the way until I reached the paved road at the bottom.

The trail comes to an 4wd road which had decent camping and then starts to descend on a very long switchback before coming to a creek. I had a few views of Mt. Shasta in the early light and then started to see the Crags across the I-5 where the state park gets its name. Unfortunately, my camera's battery died quickly. I guess not charging it before I left was a mistake, but the indicator had looked to be fully charge. I kinda regret taking so many photos last night. The trail turns west and comes briefly to a dirt road signifying the entry into Castle Crags State Park and then starts to switchback down. I passed a backpacker coming up for the weekend and then went off trail behind a tree to do my personal business. An annoying vine was where I wanted to be so I reached over to yank it out of the ground. Just as I grabbed it I noticed the only group of leaves on it; yep, its poison oak. The only bunch of it to be seen and I'm holding it. Out come the wet wipes to clean my hands as well as I can. I pull out me cell phone and try calling JoAnn's husband to let him know I'd be done before 11am. I actually think I'll finish by 10am, but its better to be safe. Continuing my descent at a fast pace (its amazing how fast I hike when it isn't hot), I finally come to a paved road and then a gate signifying the end of the trail. I then start a road walk, quickly crossing a river and the rail road tracks and finally come to the overpass of the I-5. The greyhound bus had dropped Skywalker, O'Dark and me off at the offramp right here so I'm officially done. It doesn't really seem real to me that I'm done with the PCT. I think some of my speed down the mountain was motivated by my excitement and I did notice that I was frequently singing as I hiked, but now that I'm here, I don't know what I really feel. Its similar to how I felt when I got to the Canadian border back in 2009. I suspect that this means more to me now then it would have had I been able to complete this in October of 2009 like I planned.

Its only 10:04am and my ride won't be here until 11am. So I wander up the PCT looking for trail magic. When I headed north from here, there was a cooler just on the other side of the I-5. Not this time. So I head back to the underpass and wait it out. At 11:15am, I'm picked up and he was nice enough to take me by Burger King on the way back to his house. I decide to stay the night and they feed me more meat off the BBQ grill along with ice cream.

Tomrrow morning (Saturday) I head home after briefly misplacing my car keys but I stop along the way to check on Firefly in Old Station as I heard her husband died last year. She was a big help to my hike in 2009 (especially during the Old Station Fire) so I definitely want to say hi. I end up doing some yard work for her and then taking her out to dinner in Burney. I end up not getting home until Sunday afternoon. I put all my gear and clothing in plastic bags until I can wash it as I'm paranoid that it all was exposed to poison oak during the last 2 days of hiking; even though I never showed a reaction.