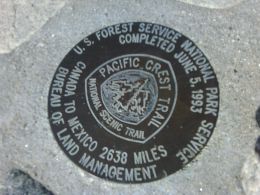 The day started off at an early 12:55am when a truck that had driven up an 11 mile semi-paved, semi-dirt road from Soledad Canyon went past my campsite, did a U-turn, stopped by my tent and shouts out "are we allowed to camp here?" I was amazingly polite in my response given the hour and lack of consideration and simply told him that only hikers were allowed and car camping was not permitted. Then he and his companion drove off presumably to find another location for their amorous objectives.

Despite the big drop in altitude there was still a significant climb thrown in getting down to Soledad Canyon Rd. Just as I was approaching the road I met two hikers coming up who had just started a section hike. They asked me about water access from here to Cajon Pass. I told them about the long waterless stretch yesterday then I thought why not give them my water report since I had enough water for the day and the report ended at Aqua Dulce. They were very grateful as it would help them carry less water. Their packs seemed enormous compared to mine and I dread to think what they weighed.

Just past the road I came upon a plinth with a PCT plate on it. Not sure why this was located here but I took pictures anyway. After that there was another climb of 800 ft despite the net drop as the desert got closer. Eventually I came to the I14 highway that connects Palmdale, Lancaster and the Santa Clarita valley with LA. It was pretty busy for a Sunday morning it seemed. I paralleled it for a mile or so and was wondering where the underpass was located as I seemed to be heading into a dead end canyon and the freeway was 100 ft above me. Then I saw the tunnel that was so far below the freeway and was over 100 yds long because that was the width of the fill that bridged the valley to put the freeway that high up. I think the tunnel was also part of a flood relief system. Although I could see light at the end of the tunnel it was quite dark in the middle section but fortunately fairly smooth so no risk of tripping on a pothole.

Immediately after the freeway I went past Vasquez Rocks. I had heard of these but never realized their sheer size and natural beauty. I took lots of pictures and included some here. They are a regular location for the film industry and several episodes of Star Trek were shot there along with numerous films.

Then I got to Aqua Dulce and hiked up the road to Hiker Heaven. This is the name bestowed on the home of Donna and Jeff Saufley. They have quite an operation going. The drill is you walk in, pick some clean clothes they provide, take a shower, put your dirty clothes in a basket and magically your clothes show up all laundered. They have tents in the yard with bunk beds and bicycles to go back into town. This setup can accommodate 50 hikers which occurred a couple of times this year. There were about 20 there today and I met a lot of new faces that I hope to see on the trail when I get going again on Wednesday. The Saufleys are famous in this PCT hiking circle and based on my experience here it is easy to see why their home and property are known as Hiker Heaven.

I picked out a cot and dumped my stuff on it - that's the code for this one is taken. Then three other hikers and I jumped on the bikes and we rode the mile down to "downtown" Aqua Dulce with its one supermarket, two restaurants and a pizza place. We elected for the Mexican restaurant and all had a good filling meal. Then back at the Saufleys we sat around chatting and drinking beer. A nice evening and a fitting closure to my first section of the PCT. Now I'm off to LA in the morning to close out a few commitments, regroup on my plan and some gear and relax a bit before resuming on Wednesday afternoon.