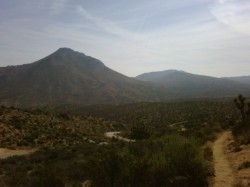 Mayan Peak - the Trail Went to the Right of the Saddle

This section is a little challenging from a water perspective and today was no exception. My strategy last night was to skip the water tank hike of 0.3 miles each way and assume the cache at 6+ miles is stocked. Then there is another cache maintained by the same couple 15+ miles further. So my primary strategy was to stock up at both caches and the backup was the other sources which would have required a significant off trail hike so there was a bit of gambling going on. The good news was the first cache was well stocked. While there, a hiker going southbound to fill in the Kennedy Meadows to Tehachapi section that he skipped around, told the other hikers and I gathered at the cache that the other cache was well stocked as well. So it looked like I got lucky. He also told us that the hiker herd had mostly cleared out of Kennedy Meadows so that was good news as well. Finally he told us about a trail angel at Walker Pass that was cooking food for the hikers going through there. Although not expecting or relying on anything it will make tomorrow's hike have an extra incentive.

Back on the water situation, as an example of the effort it would have been, there was a lake clearly visible from the trail that was 1.8 mile hike each way and a 500ft elevation loss just to get to water that has been contaminated by cows. That struck me as one of the ultimate PCT teasers to walk 2/3 of the way around that lake.

The last couple of days the trail has essentially been heading north and staying in the forested areas on the western slopes. But today the trail took a turn to the east and soon I was out of the trees and back into desert. In place of forest I got small scrub bushes and a few Joshua trees and the tread went from dirt back to that sandy gravel again. It made for a hard day especially towards the end when the trail had been regularly used by off road vehicles and they had created this washboard effect. The wavelength was about 20ft and the trough to peak was about 1 to 2ft so for me it was three paces uphill and three paces downhill and this went on for several miles. Fortunately the weather cooperated and it was cool and breezy all day. Despite that it was very dry and with all the climbing in the afternoon I was out of water by the time I reached the second cache.

But despite the revisiting of the desert it really is starting to get mountainous. After the first water cache I had a climb up to a saddle next to Mayan Peak. There were views to various mountains to the north and these are starting to get much higher. As you can probably tell the urge to get into the Sierras proper is building in me.

I met quite a few hikers again today. Early on three that were in Tehachapi came by. I thought they were a long way in front by now. It's interesting how I keep meeting up with these hikers that set a quicker pace than I do. Not sure I have quite figured out the dynamics of it but my steady 20 mile days seem to be getting me along just as quickly. Later in the day two hikers I met in Idyllwild came by the second cache as I was searching for a campsite. I had already decided that the 1600 ft climb in the next three miles was tomorrow's challenge but they elected to go for it tonight.

I found a really nice flat spot to camp but soon after starting to put up the tent I realized I was on an ant's nest so I made a quick retreat. I searched around for another location and found a small wash that would do fine. As other hikers came in they saw me and as of writing this journal entry there are six of us camped in the wash. I have warned them that my alarm goes off at 4:30am so now they are all talking about getting an early start. The word about trail magic at Walker Pass has spread so that was the major topic of conversation.

Could not get any cell reception all day but hoping to see a better signal at Walker Pass tomorrow.