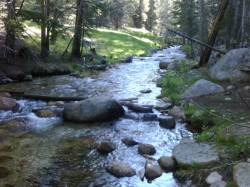 I can only describe the views today as spectacular and the water situation as too much. You'll see what I mean as I go through the day.

It was a cold night even though I was down at just below 10000ft and camped on a nice pine straw base. I found it difficult to get out of bed and did everything I could in the tent including breakfast before reluctantly getting up.

The trail continued its downhill from last night to the Rock Creek Crossing. Up until now the creek crossings have been no more than hop across a couple of rocks that are above the water level. Not this one - it was a raging torrent compared to all the other creeks. I did some reconnaissance upstream and found a downed tree straddling the creek. This looked a better place to cross than the trail that was sure to drench my boots. So I sat on the tree as though it were a saddle and slowly inched my way across. I made it to the other side nice and dry. To be really frank I simply didn't want wet boots starting off the day. But I was now paying a lot more attention to the data book when it uses the verb "ford".

The trail then went up the other side of
Rock Canyon, crossed a big flat as I went around Mt Guyot and then dropped down to Crabtree Meadow. This is where the side trip to Whitney starts. I met three thru hikers that did Whitney yesterday. It was cold on the top and they got their feet quite wet from the snow they had to cross near the summit.

Leaving the meadow also required a fording of Crabtree Creek. Not as fast or furious as Rock Creek but still a wet feet situation if I crossed at the PCT point. Luckily about 20 yards downstream there were two trees laid together making it an easy and dry crossing.

The topology today was rather unusual. The creeks would run through deep and rocky canyons making the trail technically challenging both going up and down. But each time I reached the top of the canyon there was a large plateau that was forested and pretty flat. I'm guessing the canyons were cut by the glacial actions that formed so much of the Sierras.

As I was having lunch two hikers that had been at Kennedy Meadows came by. They had camped half way up Whitney last night and reached the summit this morning. It was very cold and windy, so cold that one of their cameras froze up. That was unfortunate as the weather was clear and the views from the top magnificent. They were now heading off to get over Forrester Pass today as well. I noted that was a lot of climbing in one day and way beyond my capabilities to which they just shrugged it off as no big deal. Further evidence to my theory that "youth is wasted on the young".

In the next canyon I had to ford Wright Creek. This was as strong as Rock Creek but this time there was no alternative. So I double bagged the phone, took off my socks, took the footbeds out of the boots, pulled up my trousers and waded across. Supposedly this approach lets the boots dry a lot quicker and it seemed to work as my feet only felt slightly wet afterwards and never got cold.

The next creek, Tyndall, was the strongest of them all and I simply had to repeat the cumbersome process with my boots. The creek was flowing very strong and it was quite difficult maintaining my balance. I didn't need to fall over and get everything I was wearing and everything in the pack soaked. As soon as I got across I went straight for a campsite to dry things out. As I am laying in my sleeping bag I can hear the roar of the water rushing down the canyon. I hope it's therapeutic and sends me to sleep. I am camped at over 11000ft and I suspect it will be a cold night.

So now you can understand the "too much water" comment in the opening. Throughout the day I was treated to the most spectacular panoramic views of the Sierra Crest and the Great Western Divide. I even got a great view of Whitney as I was leaving the Whitney zone. I can't name all the peaks there are just too many of them. The PCT is now coincident with the John Muir Trail (JMT) and I believe when I get over Forrester Pass tomorrow the scenery gets even better. I can't wait.