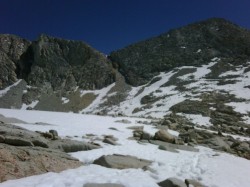 A spectacular day - the highest point on the PCT on the longest day of the year. But let me start at the beginning.

It was a very cold night. I wore an extra sweater and my woolly hat and I was still cold. I think I have found the limit of my thinner air mattress. It simply did not provide enough thermal insulation from the ground. When I did emerge from the tent, my boots that I thought would dry a bit overnight were frozen solid. Water in my bottle had ice formed inside as well. So I boiled some water for my oatmeal and held each boot over the boiling water. This softened them enough to at least pry my feet into them.

So I got going a bit later than I expected but it turned out to be a good thing. The trail kept a gentle climb over Bighorn Plateau and around Tawny Point, a not too attractive pile of rocks. Then I could see the crest where Forrester Pass went across. But without me already having seen photos I could not make out where it lay along the crest. When I got close I could just make out the trail in a few places but by now I was also crossing quite a lot of snow. It was very hard from the cold night and easy to walk across until I got to the base of the crest where the gradient rapidly increased. This is where I put my Microspikes on as I could not see how I could safely get across the icy snow with just plain boots. They worked so well I didn't bother trying to find the trail that was mostly snow covered anyway and I went straight up. The poles were useless as the tips wouldn't break through the snow's crust - just like putting them on a rock. And standing up on the slope with the pack made balance a little difficult, so I put both poles in one hand and went down on all fours and essentially crawled up the slope. I felt very confident that I had tremendous traction with my feet I did not feel uncomfortable or unsafe doing it this way. I have no idea how the people who had no snow equipment made it up there but there were no bodies laying around so they obviously did.

Above the snow slopes the trail was clear. Here it had been cut into the rock face and was impressive from a trail making perspective but an easy climb. Then I reached the snow chute, the part that probably has worried me the most. It didn't look very difficult but I put the Microspikes back on anyway and went across without any difficulty. At the top I let out a yell of satisfaction as I was now at 13200 ft and the highest point on the PCT. But don't be fooled into thinking it's all downhill from here.

Two other hikers soon came by and we took photos for each other and I made a panoramic video. We all three stayed there over an hour taking in the view and I gloating to myself over the accomplishment. It was not very cold with extra layers of warm clothing and it was a clear, cloudless day so the views were incredible.

The way down was a big snowfield and between us we figured out from the map and other footprints where the trail went. The other two tried glissading down into the bowl. When I saw how ineffective that was I just walked down. By now the snow was starting to soften and it was easy to posthole. That means when you shift all you weight onto one foot the snow crust gives way and you sink in. At the top it was only to mid-calf level but lower down I went in knee deep and once all the way to the top of my leg. So you have to be careful as going too fast and a sudden posthole could do some serious knee damage. One other interesting part of the descent was crossing snow bridges that covered flowing water. I could hear the water underneath and occasionally could see it through a hole in the snow which was only about two feet thick. I followed the footprints hoping that I would not be the one to push the structural integrity of the snow bridge over its limit. I walked as lightly as possible and fortunately without incident.

Once I got through the major snowfield the trail was clear for a bit and then more snow. I got to one point where the snow was steep and there were two curved tracks and very few footprints. I guessed everybody had glissaded down this part and it didn't have a bunch of rocks or a drop off at the bottom so I said to myself let's go for it. I sat down let go with my feet and slid down on my bottom. It was a hoot and although my pants got a little wet they dried in no time. A little further down the trail went into a fairly small patch of snow but there was absolutely no trace of it coming out. All three of us spent quite a while finding it again.

Once the snow was no longer an issue I started to spend some time on the scenery. I was going down through Bubbs Creek Canyon and it was almost identical to Deadman's Canyon I did last year. The shape was a classic "U" with smooth rock faces, all signs of the glacier cutting its way through. If you go back to one of my pre-trip posts when I was testing out photo insertion onto the journal, I put in a picture of Deadman's Canyon that you can compare to the one here.

The canyon was spectacular all the way down. At one point I had to cross Bubbs Creek and it was as rapid as Tyndal Creek yesterday. My feet had been wet all day but I still decided to go through the ritual of taking off socks, etc. After that I reached Vidette Meadow and then East Vidette, a spectacular chunk of granite over a thousand feet high and with a smooth surface. As you can probably imagine the camera was overused today and I am sorry that I can only post a maximum of five.

At the bottom of the canyon the trail then "aggressively attacked", as the guide book put it, the wall of Bubbs Creek Canyon and this was a very steep 1200 ft climb in less than two miles. At the top on a big saddle was the junction to Kearsage Pass and resupply for most people in Independence. I turned left and went down to Charlotte Lake where I found a very nice lakeside camp site and looking forward to a zero tomorrow.

Overall it was a tough day with the two major climbs and the snow. But overall it had to be the best day yet - very satisfying, beautiful scenery and the high point of the trail. I think any trepidation I had with the snow has now gone as well.