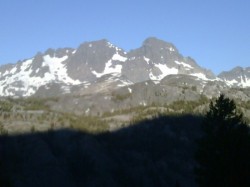 The Early Morning View of Mt Ritter and Banner Peak

We woke up to the view of Shadow Lake and its long waterfall on its outlet. I also saw a bright shooting star fly across the pre-dawn sky. Kurt gets up even earlier than I do and so we were off to an early start. We were immediately treated to superb views of Mt Ritter and Banner Peak as we continued along the ridge. Then we passed a number of trail junctions to various lakes and thereafter the climbing started. The first pass was a 700 ft elevation gain to Island Pass. On the way we passed Thousand Island Lake and it was obvious how it got that name. Island Pass was more like a saddle than a true pass. Immediately after we crossed the pass it dropped 600 ft as the trail worked its way over towards Donahue Pass.

This pass entailed another climb of 1600 ft over a rather rocky and difficult trail. Snow wasn't really an issue on the way up - it obscured the trail in a few places but we were always able to walk around the snow patches. Just before the top we stopped and ate lunch by a pretty lakelet. Amazingly I got good cell reception and was able to transmit yesterday's journal and its pictures. Given I was surrounded by mountains I had no idea how the signal was so good but I took advantage of it and briefly called home as well. We were at the summit soon after but it was rather crowded so we started down immediately after taking a couple of photos. Cell reception on the north side of the pass was non-existent even though it was facing Tuolumne Meadows which does have good coverage.

The trail down had more snow on it but it wasn't too difficult to find the way. Two sets of eyes certainly helped. The trail was a difficult one from a technical standpoint and it had all the features that could lead to injury - large unstable rocks all over, loose tread, and steep steps. And of course there were the numerous torrents of water crossing the trail just to make it even more challenging. This lasted for well over a mile and being very careful the pace wasn't much quicker than going up.

The trail entered Lyell Canyon and it was very scenic as we dropped from the 11,000 ft pass down to around 8,800 ft. It was steep for a while but when it reached the Lyell River it became very gentle. We hiked along the river for about an hour when this campsite popped up and there wasn't much debate on whether to stop or not. The mosquitoes were rather active and as we had a fire ring at the campsite we lit a fire. That kept them at bay while we cooked and ate dinner. We are about six miles from Tuolumne Meadows so we should be at the store/PO around the time it opens in the morning for me to hopefully retrieve my resupply despite it being a holiday.