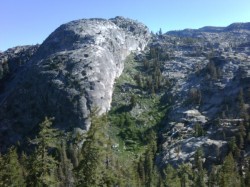 Scene on Back of Selden Pass

A very tough day again. We started out at a reasonable hour going down the other side of Benson Pass. The terrain was characterized by very steep rock faces all around and this must have been a significant challenge for the trail designers. So instead of just going down, the trail had some steep inclines and a rather tortuous path to work its way through all the natural obstacles. Consequently it was like a lot of yesterday's tread - slow going. One section was particularly difficult when it dropped over 600 ft in 0.8 of a mile and it was very rocky with lots of steep steps - a real knee burner.

As soon as that was done we faced a 1600 ft climb to Seavey Pass. This was the true test of whether we had our climbing legs today and the good news was that both Mike and I went up without stopping at a very respectable pace. Near the top we came upon a lovely lake with wonderful surrounding scenery, so we stopped there for lunch. Typically the passes become easy to locate once you get near the top. However, Seavey Pass was below the tree line so it wasn't easy to figure out exactly where it was especially as the PCT went above the pass before descending the other side. I never really knew when I was at the actual pass but knew I had crossed it when I reached the next data point on the backside.

All day the scenery was a continuation of yesterday with these almost sheer canyons of smooth grey, glacier worn rock. We were either looking up 1500 ft at these impressive canyon walls when starting a climb or looking across the canyon once we got to the top. To me it was a spectacular sight no matter which direction I was looking. We are still in Yosemite National Forest so if you have seen Yosemite Valley you can understand how magnificent the surroundings have been since we left Tuolumne Meadows.

Then it was time to tackle Stubblefield Canyon in which the trail dropped 1000 ft in a mile. As you can imagine it was steep and tricky and the pace was slow. At one point where a creeklet should have flowed across the trail for us to hop over, instead it found the trail was the easy way down. So we had to contend with a raging torrent going down the trail with us.

Of course as soon as we got to the bottom there was a wet river crossing. The mosquitoes were rampant and as soon as I exposed my legs as I pulled off the trouser leg bottoms it seemed like they did a bugle call to all their buddies to come get a piece of fresh flesh. As soon as I got across the river I had to get the Deet out and spray my legs as they were eating me alive.

Then it was time to climb once again - this time up 1200 ft to the Macomb Ridge Pass. This was another steep climb and it did me in for the day although it was 8:00pm by the time we reached the pass. All I had on my mind was find water and then a camp site, both of which we got lucky on.

So it was another long day of climbing and descending canyon walls. I talked to a number of other hikers and they mostly thought as I did that the going would get easier after Tuolumne Meadows and they were as surprised as I to find it just as tough, albeit in a different way. They also expressed the same sentiment that after all those passes between Kennedy Meadows and Tuolumne Meadows their bodies should be conditioned for this. And despite that, they all said this stretch was taking its toll. For me I am now mostly concerned about getting to Echo Lake, my next resupply near Lake Tahoe, before I run out of food. I was planning to get there on Saturday but I am already a day behind.