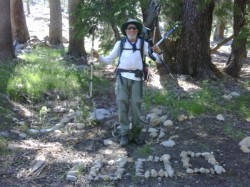 Me Celebrating the 1K Miles

Obviously today was a major milestone in reaching the 1000 mile mark in the afternoon. When I started this I couldn't comprehend walking that far but now I have done it. I used to think getting in the car and driving a thousand miles was an achievement, but not anymore. The marker was a well laid out set of stones and I posed behind it with trekking poles held out to indicate "1K".

It was an interestingly different day in that we were not climbing steep canyons. I was glad I put the effort in last night to reach the pass and this morning we started off with a descent of 1000 ft. After that the trail was pretty gentle for the rest of the day. Although we climbed back up 1600 ft to Dorothy Lake Pass it was stretched out over ten miles so it didn't take so much effort. We essentially followed Falls Creek upstream to its source near Dorothy Lake.

The mosquitoes were out in force again, especially in the long Grace Meadow. We had a tailwind and that seemed to allow them to swarm all over us. When we stopped they disappeared presumably because they were blown away by the wind. But when we moved at about the same speed as the wind I am guessing the relative velocity being small enabled them to fly around us. A weird phenomenon that required the Deet to be pulled out frequently.

I had lunch at Dorothy Lake at a windy spot that was bug free. From there it was a mile to the pass. There were quite a few snow patches especially on the north side that I had to negotiate. And then came the 1000 mile mark where we stopped for a while for pictures and simply trying to comprehend the accomplishment.

We did a few more miles to make it a 20 mile day. Then we saw a nice camp site and decided we had done enough. There was a fire ring and lots of available wood so I lit a fire that we enjoyed for the rest of the evening. It was like a magnet for hikers as there are now five of us camped here. So we had some good company and the opportunity to chat around the camp fire.