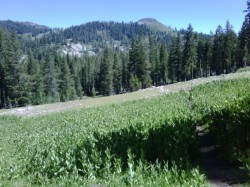 Today was another day of extremes. Mike and I were a little late getting going and then we spent the next three hours walking through thick forest. The bugs were on the rampage so the head net and Deet were the protection of the day. There were very few openings in the forest to get any sort of scenic view. It's only saving grace was that it was a very gentle tread - no significant inclines or declines and mostly a soft dirt surface.

Things changed as we approached Barker Pass. The trail opened up and we had some nice views as we went through some of the small meadows. At Barker Pass there were a number of cars that had come up the wide and smooth dirt road. This is a major trailhead for the Tahoe Rim Trail that circumnavigates Lake Tahoe. There were also picnic tables there and it seemed a more civilized way to eat lunch that we decided to have an early lunch around 11:45 am.

It was another one of those passes where the PCT continues to climb after the low point. At the top of the climb we got our best view so far of Lake Tahoe. I tried the cell phone and got a full 3G signal and after fixing a problem with my email account I sent out the last two journals and their pictures. I raced off to catch up with Mike and on the way down the pass I met a day hiker whose wife was not feeling well. I think she was just dehydrated coming up the steep trail as it was rather warm around midday. I offered her some Gatorade but she declined. I did convince her to take a shot block when I explained it would restore her basic electrolytes. After a while I was convinced she would be OK so I moved on.

The trail continued downhill a mile or so and then switched over to another ridge and began to climb. It was quite a long steady climb and when I got to the top Mike had found a nice spot to admire the all around views. I joked to him that it was about time we had a good steep climb as this gentle tread was softening us up.

The views were literally in every direction. A large forested valley to the west, another valley leading to Lake Tahoe to the east, and Twin Peaks to the north. A few hundred yards past this point the Tahoe Rim Trail and the PCT split and this is where Mike and I went our separate ways. He is going down to the north shore of Lake Tahoe to spend time with Emily and get some replacement gear.

My trail went behind the Twin Peaks and along the Sierra Crest for a spell. It opened up to this large canyon with a steep granite wall - no wonder they call this the Granite Chief Wilderness. The trail went along the crest for about three miles and each time I got a view to the east more of Lake Tahoe opened up. I must have taken eight pictures thinking each might be my last opportunity to see this wonderful lake and each one had more of the lake to see. I went right beside Alpine Meadows ski resort and recognized much of it despite it looking strange with no snow.

Then the trail dropped significantly down to the Five Lakes trail junction where there was the first water for over seven miles. I had run out completely some miles back so it was a welcome sight. I downed a liter and loaded up with three more. I think I am now getting into territory where water can no longer be taken for granted.

About a mile later there was a sign to Granite Chief Mountain and although it was getting late the idea of camping on the ski run at Squaw Valley that I know so well was just too appealing. So I stepped up the pace, climbed a long ridge and eventually got over the ridge that took me into the ski area. After a few switchbacks down Granite Chief I got to the ski lift and there was a small flat spot. That's my camp spot for the night overlooking Squaw Valley. It was too dark for pictures so I will take some in the morning and post with tomorrow's journal.