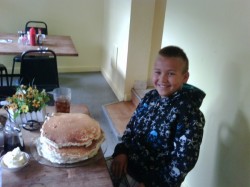 Although it didn't rain again (I think) overnight, when I woke up the trees were dripping extensively and the tent was very wet on the rain fly. There were a few drips inside from the zipper area, but overall I was generally dry and slept well. But my clothes were all still wet through and I spent a long time contemplating what to put on. I had a dry T-shirt and swim shorts as well as rain pants. Or I had the wet clothes. Despite the reluctance, I decided I needed to get used to having to put on wet clothes so I that's what I did. It wasn't as bad as I had feared, but it still wasn't very comfortable. I packed up rather carelessly as the pack was now half empty and I strapped the wet tent to the outside. I didn't eat anything except a candy bar as I was now going to the cafe in Seiad Valley for breakfast.

Grider Creek campground is at mile 1655 so today I started the final 1000 miles of the northbound PCT. It feels good to think the miles to go is now just three digits until I look back and remember that the first 1000 went from Mexico to Tahoe.

The trail from the campground to Seiad Valley was a road walk of 6 1/2 miles. Apparently the PCT has tried to get a trail but with uncooperative property owners and the cost of a long span bridge over the Klamath River, they have abandoned the attempt and the road is now the official trail. It took two hours, much of it following the river to the main road, Highway 96, that crossed the river and then back paralleling the other bank to Seiad Valley.

I made a beeline for the cafe and ordered a Western omelet. There were other hikers there all enjoying freshly cooked food. The cafe is famous for its pancake challenge. You get five, one pound pancakes and if you eat them all they are free. Despite my heightened metabolism, it wasn't for me or any of the other hikers for that matter. But a kid ordered it and we all went over to see the stack and take pictures. It was enormous and I was glad I didn't attempt it as I think that much pancake would make me ill. The eleven pancakes I ate at Kennedy Meadows paled in comparison. When they left his mother told us he never got through the first one so they had a real heavy doggy bag.

I then went up to the RV park where I stuck my sleeping bag and a few other items in the dryer. I also set up the tent and dried it out along with a few other wet odds and ends. I also got access to the wifi so I have all the journals and their pictures for the last week sent out. I retrieved my resupply from the PO and proceeded to make the pack heavy again with four more days of food.

Recall that yesterday I was at 6800 ft and now I am at 1371 ft, which I am sure is the lowest point so far. So to get out of this valley I have a climb of 4600 ft over 8 miles. Usually the temperature in Seiad Valley this time of year is in the three digits but today it was in the low seventies. I had planned a zero here but there wasn't much to Seiad Valley - the cafe, the store, the PO and the RV park was it. And the weather forecast predicted hotter weather coming over the weekend. So this was a perfect time to leave town.

I thought a late lunch would be a good plan before leaving but that was immediately scuttled when I found out the cafe had closed at 2:00 pm. I went to the store and microwaved a frozen burrito and got a homemade cranberry scone that was really good. I also supplemented this morning's caffeine from six cups of coffee with a liter bottle of Mountain Dew. And then I was off again.

The trail started with a mile road walk that was flat. Then the climbing began. I didn't have a lot of water and I got to the first spring after 3/4 mile. It was 4:40 pm and the next water was 4.6 miles and a climb nearly to the top. I was tempted to fill up but I thought I could get to the next spring with what was left in the bladder without the weight of any more. I allowed three hours to get there and that would give me time to fill up and then locate a campsite.

Although it was a tough climb, the trail was really in good shape. There was one clap of thunder on the way up but the rain held off thankfully having just got everything dried out. I reached the spring in just over two hours which surprised me that I was setting such a good pace. The spring was a small pipe driven into the side of the hill that had a trickle running from it. But it didn't take long to fill a bottle. As the next source is over ten miles and I needed some for overnight I filled up all but one liter of my carrying capacity. That made the pack a lot heavier but I was only a short way from the ridge top so I didn't think I'd have to carry it far. I went less than a mile and reached Darkey Creek Trail junction and there was a small spot just big enough for one. It is now quite cold and windy and I am just a fraction below the clouds and with a view looking down to Seiad Valley way below me now. It feels like I am back in the Sierras.

Overall, I was pleased to get that climb out of the way and now have a good start on this section to Ashland.