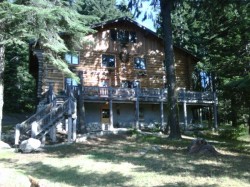 I picked a good campsite last night in the dark. I had my own picnic bench and was about 20 yards from the toilets. What luxuries I value these days. Last night's wind had dropped completely and it looked like the start of a nice day. It had also warmed up overnight. I left the rain fly open at the top because the last few mornings everything in the tent has felt damp, I'm guessing from condensation of my breathing. This morning things were dry so whether that was due to my analytical mind or the weather warming up I shall never know.

Mt Ashland has a ski resort and the access roads to the campsite were also the ones that went to the lifts. On my way down to the trail on the road I met the hiker from last night who has just started to section hike Oregon. We started off down the trail together but he wasn't walking as fast as me and we quickly separated.

The trail went on a steady descent as it started the 2200 ft drop down to Interstate 5. I could hear the traffic from several miles away and it just got louder as I got closer. Especially noisy were the trucks that were using engine braking on the steep hill going down towards Ashland.

I crossed a jeep road and the trail signs showed the trail was now a cross country skiing run as well as a hiking and equestrian trail. As a ski trail it looked pretty challenging with lots of tight turns and some steep ascents and descents. The trail was now marked with blue diamonds instead of the silver ones everywhere else. The blue ones were also more frequent to help the cross country skiers pick the right path through all the trees.

The trail came to a paved road and there was the Ashland Inn, a bed and breakfast hostelry. It looked very nice nestled in the forest and while I was taking a picture I got to chat with some guests who were sitting on the deck. They were very complimentary about the Inn and highly recommended it. Certainly a place I'll put on my list of places I would like to come back to some time. The owners also were very aware of the PCT hikers and put in a spigot for water and a rest area.

When I reached Highway 99, which at that point was parallel to the freeway, I could see Callahans Lodge. I had read a lot about Callahans and knew it was hiker friendly with showers, laundry, etc. My information said they were only open for breakfast and dinner but as the place had just been completely rebuilt only a year ago after a devastating fire, I called in case the data book wasn't current.
It wasn't and they were open for lunch. I thought it would be a good time to get cleaned up and it was coming up on lunchtime so I walked the short mile down to the lodge. Although they did a really nice job of rebuilding, overall I was a little disappointed. I didn't mind paying for a shower and laundry, the most expensive yet, but I did object when the hot water ran out in less than five minutes. I also had to get two lunches as the serving size was not consistent with hiker appetites. They gave me a feedback card so I provided some constructive input. But they were good enough to find me a ride back to the trailhead so I didn't have to climb the hill on a road in the heat of the early afternoon.

Soon after I got started again I met my first southbound thru' hiker. He started around mid-June at the Canadian border so he has had to contend with snow in the Cascades but will have an easier time in the Sierras. We chatted briefly and he gave me some good information on the water opportunities coming up.

The trail went around and up the base of Pilot Rock which was a large rock protruding probably 200 ft out of the top of an otherwise forested hill. I climbed up to a saddle and who was there but the same hiker I had met this morning. He had passed me while I was at Callahans and had found a great spot to camp. It was beside Pilot Rock and had expansive views to the south. Dominating that view was Mt Shasta, although now far in the distance. It was rather hazy and not good for pictures.

I then located the better of the two water sources that the southbound hiker told me about and since it was getting late I started looking for somewhere to camp. I have noticed during the last two days in Oregon the lack of any open, clear and flat areas that are regular campsites. It seems that all the ground off the trail has grasses, ferns, etc., as well as low shrubs growing everywhere. Eventually I found an old jeep road and just below that a path that had less growth underneath some high tension wires. It wasn't the best campsite I've had but it worked and I just hoped it stayed dry so that the tension cables wouldn't "sing" all night.