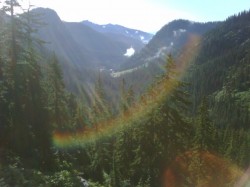 Looking Back to Alpental Village and Snoqualmie Pass

As I mentioned yesterday, there was a fire closure of the PCT north of Snoqualmie Pass, yet the rains of the last three days hadn't reopened the trail. There were a number of alternatives but the detour that I and all the other hikers were taking was one that another hiker had posted on the 2009 PCT Yahoo Groups page. There were detailed instructions and water reports throughout the 26 mile detour. It didn't require any paved road walking and the associated dodging of fast moving vehicles. It was also described as very scenic but the best part of all was that it was 12 miles shorter than the closed PCT section.

I was up early and immediately checked out the weather. It wasn't raining and I could see some stars so I knew it was a clear sky at last. I got to the Pancake House adjacent to the hotel at 6:30 am just as they opened. I had a nice cooked breakfast of Eggs Benedict along with four cups of coffee. And then I was off again after my zero day. I went down to the I-90 junction, walked under the freeway, ignored the PCT trail and headed up towards Alpental Village. I went past the ski lifts for Alpental ski area which is actually part of Snoqualmie Pass although it's on the opposite side of the freeway. I didn't have enough time to switch over to Alpental when I was here in February but I've heard it's a very challenging area and it looked the part from what I could see.

Just past the ski area was the Snow Lake trailhead. There was a good map there and I took a picture of it so I could have a backup to the written directions. It actually looked pretty good on my small screen and zooming in I could see all the map details.

The trail climbed quite steeply for the first three miles but I had great views down the canyon back towards Alpental and Snoqualmie Pass. It was a well constructed and maintained trail and progress was steady. Then came the penalty phase of the detour - a 2700 ft descent on one of the toughest trails I can recall. It was heavily overgrown, full of obstacles and very wet and slippery. Progress was very slow and it was tough going especially knowing I was giving up so much altitude. I also was being ultra careful as it was a trail that was rich in accident opportunities.

Eventually I made it to the bottom and then the trail followed the Middle Fork River. It was fairly flat but had a lot of blown down trees to get over and around. At the end were hot springs and a welcome sign for PCT hikers. I believe this was another clothes optional hot spring so I avoided it. Then there was a long and gradual climb along an old and abandoned forestry road that also paralleled the Middle Fork River. At the end of the road was the trailhead for the Dutch Miller Gap trail that was a consistent and long climb over a pass.

Once over the top I went down to Lake Ivanhoe. That was another very difficult and treacherous trail and I did a bottom slide when my feet slipped from under me going down a muddy slope. Fortunately no harm done, just a lot of mud on the bottom of the pack. Then, at the end of the lake was some good campsites and that's where I settled for the night. Not quite the route I had planned for today but it was a good alternative to the forestry service suggestions.