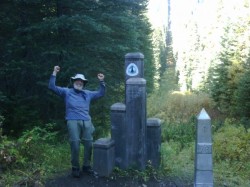 I did it! I am in Canada after completing the PCT thru' hike. I am still pinching myself to make sure it isn't a dream that I just walked 2655 miles from the Mexican border to the Canadian border. Four months and nine and a half days is what it took - nine days ahead of my planned schedule. To complete this feat is a fantastic feeling that is so personal it is hard to describe.

You might have figured out that I had earmarked the 18th to finish but I didn't want to declare that date and set too many expectations or put undue pressure on myself. Why the 18th? Well the anal retentive engineer in me figured out that 132 1/2 days divides exactly into the official length of the Pacific Crest National Scenic Trail of 2650 miles to give an average of 20 miles per day - that's all days including zero's and nero's. But more importantly, by finishing this weekend, Ann and Matthew had the opportunity to fly up to Canada and meet me and that was really special for me and a great motivator.

Just to clarify all these different numbers, 2650 is the official length of the PCT border to border but the data book we nearly all use takes it to 2655 at the border plus nearly eight more miles to make it 2663.5 at the terminus. The trail length varies each year as they change sections and as you might recall I had two enforced detours and two alternate routes I took because they were more spectacular scenery.

Although I slept well on Woody Pass and it wasn't as cold as I anticipated last night, I was up early and hiking by 5:45. There was no way I was going to sleep late today as the excitement was building. I had 12 miles to get to the monument and the 8 more to Manning Park Lodge. I continued climbing out of Woody Pass and got to the highest point in Washington state of 7126 ft. I found a rock to sit on and have a snack, but really I just wanted to savor the moment as I knew as soon as I dropped altitude I would be in the trees the rest of the way. It was a pretty location with a little pocket lake well below me and jagged mountains having the sun gradually illuminate their summits. Part of me didn't want this to end, but it got overwhelmingly outvoted by the rest of my body. So on I hiked down into the forest. Just after 10:00 am I was dropping down in altitude and then I saw this straight line swath of trees taken out and I knew immediately it was the border. And then I was there at the 49th parallel and the PCT monument as well as the mile 78 border marker.

My feelings at the time are hard to describe, they were a combination of great joy, relief and excitement to see Ann and Matthew. But in the back of my mind I did feel some sense of disappointment the trip would soon be over and that and I wouldn't have this daily dose of natural wonder and beauty. I knew my head would be in an odd state of mind so I was quite prepared for such mixed emotions.

There were two other hikers at the monument, one of whom had taken 29 years to put all the steps together in sections and he was equally exuberant about completing his journey. We each took photos for each other and he and I put messages in the register. It's hard to be inspirational and profound at such times so I just wrote about it being a wonderful experience and thanked all the great people I met for their help and encouragement.

And then I was off again to Manning Park. Just to add some spice to the Canada section there was a 1000 ft climb around Windy Joe Mountain. But it wasn't a tough climb and on the way up I met Matthew who hiked in from Manning Park. It was great to see him again. We hiked up the rest of the hill and then stopped for lunch at a nice location. Within a couple of hours we made it to the terminus of the PCT. It was nothing really special, just a typical parking lot trailhead. But for me it was the end of this long journey and time to go back to civilization. I tried to put some journal words together while Matthew went to get the car and bring Ann over. As you can understand it was a very special time for us.

I will add a couple more entries when I get back home to close out this journal.