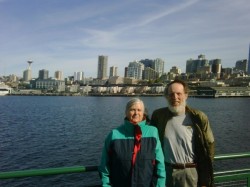 Ann and I Enjoying the Ferry Ride

The Journey Home and Some Final Thoughts

Now I am back home I think it’s time to close out this journal with a few of the after-hike events along with some final thoughts. Ironically, we woke up next morning in the lodge and it was raining quite hard – another example of how lucky I think I was with the weather. Three foul days in 133 is pretty good and I only had about a week of sweltering weather in Southern California while it was cold crossing the Mojave Desert. I think anyone contemplating doing a thru’ hike shouldn’t take my 2009 experience as a representative weather year.

While having breakfast, Vegemite showed up rather wet but pleased to have finished. We last hiked together coming out of Belden and I thought he was several days in front of me but somehow I had passed him. We had breakfast together and we ended up giving him a ride to Vancouver where Ann, Matthew and I spent a day being tourists. The next day we drove back to the US and stopped in Bellingham to have lunch with a friend from work who has retired to the area. Then we drove to Seattle and a visit to the REI signature store – quite impressive and at least three times bigger than the typical REI. Then more touring – mostly Pikes Place Market in Seattle. The next day we took the Bainbridge ferry and drove to Port Townsend to visit some very good friends. And next day it was the airport for the flight home to LA. They had room in first class so I treated Ann and I to an upgrade while Matthew took a separate flight to San Jose. At home it was time to fix and maintain a few of the urgent things that had broken or were in need of TLC. I also called my friends at work and told them if they wanted to see a bearded Peanut Eater, then we need to have lunch the first day I was back as I was visiting the barbers that afternoon to have all those white whiskers removed – I didn’t want a lot of job offers playing Santa Claus at the local shopping mall over the holiday season.

One request I received was for a gear list and an assessment of how well it performed, so below is a quick summary:

· Pack – Deuter 65 + 10 – this isn’t an ultralite pack, but its weight was on the lighter side for a pack of this size. It stood up very well to some harsh treatment and I was pleased with it. I packed everything inside and it took all my gear and six days of food without being overly stuffed.

· Tent – Big Agnes SL2 – this was the one luxury I hung onto. I wanted more than a tube to slide into at night and be able to have everything inside with me. It was a good tent although the zipper on the inner tent was frail and eventually failed. But with REI, I easily got the complete tent replaced.

· Sleeping bag - Marmot Sawtooth 15 deg – I’m not sure a lighter bag would have worked for me. I was almost always warm but rarely got too hot. And, I wore thermal underwear every night, not just for warmth but also to try and keep the bag from getting dirty and smelly. That worked very well.

· Mattress – Thermarest ProLite Plus – this saved two pounds over the full length pad I already had. It was three-quarter length and worked great. It’s a half inch thick when fully inflated and I think that isn’t enough when the temperature is well below freezing. But I only felt that cold one night and it wasn’t too bad with extra clothes on in bed.

· Stove – Trail Designs Caldera Keg – this was my first concession to ultralite and I left my MSR Whisperlite stove at home. It was basically a beer can and a cone to hold the heat and was only capable of boiling water. Since I was not into cooking anything fancy, it worked perfectly for just rehydrating hot food – oatmeal, noodles, potatoes and Mountain House bag dinners. I also used Esbit tablets as they were safe to mail. I also carried the alcohol burner and a small bottle of alcohol as a backup in case I ran out of Esbit or the weather (wind) was too bad to light the Esbit. I found that dousing the Esbit with some alcohol always got it lit no matter how strong the wind as long as the lighter could be sheltered enough to flame briefly.

· Water treatment – after three weeks, I jettisoned the MSR cartridge filter for a small dropper bottle of bleach (saved at least a pound of weight). I researched this suggestion from Geezer and it turns out it is the recommended approach for safe domestic drinking water in the event of an emergency. I would use two drops per liter if the water looked pretty safe and would double that for dubious sources. After the first day, I couldn’t even detect the bleach and I never got sick so it either worked well or I got lucky.

· Warm clothes – a down jacket from REI, a sweater, a wooly hat, waterproof gloves, spare socks

· Rain gear – ultimately a poncho and Marmot Precip jacket and pants. The poncho is great if it’s warm rain, but if it’s cold I needed arms and legs covered. That’s why I bought the rain jacket and pants after I learned that lesson the hard way. The pants are good if the undergrowth is wet as you cannot avoid brushing against it and that gets the legs and ultimately the boots wetter quicker than any rain.

· All of this weighed just over 20 lbs which isn’t ultralight but not bad.

· Poles – Black Diamond elliptical – these were great because they had wraparound, adjustable clips so I could be confident they wouldn’t shrink on me when I put a lot of weight on them. The twist locks on other poles I have used were always a little vulnerable to sliding in under a lot of pressure. The tips did take a real beating and the plastic that holds them and attaches to the aluminum pole failed on my first set, but REI to the rescue again.

· Snow equipment – I used a set of Microspikes. They were really good early in the morning when the snow was hard. I felt very confident in my footing. Once the snow softened, I was better off with the boot sole pattern – the spikes had no noticeable effect. I didn’t take an ice axe as I never had any practice on how to use one. At the kickoff there is a good seminar on how to handle the snow and creeks and the folks there have a pretty good idea on the conditions one can expect each year. This year they were confident and ice axe wasn’t needed and my experience supported that assertion.

· Bear canister – I had the largest one I think on the market, the Bear Vault BV500. But even this wasn’t big enough for six days of food, so I had to keep some food double wrapped in plastic and hope that I didn’t attract a bear overnight. It worked out OK. I only kept the canister for the required section of the Sierras and sent it home at the first opportunity.

· Boots – I got by with two pairs of Lowa Renegade (wide size). I liked them because the toe box was really wide and they fit very comfortably. I also used one pair of Superfeet (the green ones). My criticism of the boots is that I expect them to wear out from the soles up, but the stitching was the weak link. I also felt the waffle sole pattern wasn’t too good on loose tread. I tended to slide quite a lot more than other people and I think that was down to the tread pattern and/or the hardness of the rubber sole. That might be harsh commentary since I was getting 1400 miles from a single pair – other hikers using trail runners were up to six pairs for the trip.

I hope that helps prospective endurance hikers selecting gear. If I had to do this over, I would pick a lighter, smaller pack and resupply more often. I probably would find a lighter tent alternative but it would have to be one that provided full protection from the bugs. That’s all I can think of that I would change.

It’s now more than a week later and after a lot of relaxing, I have had some time to reflect on the trip. I have described it to some friends in this way – I got to experience at least ten times more natural beauty than I ever expected, but from a physical and mental perspective, it was ten times harder than I anticipated. I did not want to clutter the journal with complaints about aches and pains that occurred somewhere in my body virtually every day. But I was very lucky in that none of them were more than a fleeting annoyance. I had no blisters at all despite the new boots I started with. I had one minor shin splint that hurt for a few days in Southern California but I managed to walk it off after a week or so. The only residual issue is my feet are a bit on the numb side but I have spoken with many of the other hikers and this is commonplace and should clear up within a few months. Not bad for an old guy starting this with only seven days of backpacking experience since I was a boy scout.

I would be lying to myself and all readers of this journal to say there weren’t some dark moments where I was asking myself why I am doing this to my body. What’s the purpose, who am I doing it for, have I set expectations that I am trying to live up to? Such thoughts were not rampant, but they tended to appear on those days when my legs just didn’t want to work properly or the trail was just a big, nasty obstacle course. This journal was a great help because I would ask myself what natural beauty have I already seen today that I can write about and this got me past these dark moments pretty quickly and my mind turned to a more positive attitude. I think that not taking many days off also helped because the motivation to go back on trail was severely tested by having a long break.

I really appreciated all of the messages of support an encouragement throughout the trip. They were very motivating and I want to thank everyone for their support and kind words. I am in the process of responding to all those messages that I can identify, and to all those that were anonymous please accept my sincere thanks. I hope this journal was as interesting to you as it was enjoyable to me to write. I also want to express my thanks to all my fellow hikers for their friendship and encouragement. We were a very diverse bunch but the esprit de corps amongst us was incredible. We supported each other, joked with each other, and occasionally even hiked with each other. I will remember these friendships fondly for a long time.

And now I have to figure out what retirement is all about. My best wishes to you all – Peanut Eater