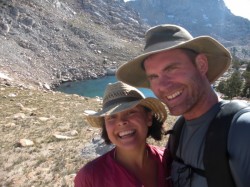 Where are they now?

I've heard that I need to finish this blog by letting people know how it all ended...What ever happened to Censored/Kat? Did she regret her decision to get off the trail? Where is she now? So here it is....

I got off the trail on August 7, 2009. I spent August and September 2009 traveling around Oregon, Seattle, Idaho and New Mexico before settling back in Minneapolis. I went back to work as a lawyer for a non-profit. It was nice to get back to home and family, but there was still the draw of spending time outside. I spent the winter in Minneapolis working, cross-country skiing and camping in the snow.

People ask me: Do you regret getting off the trail? Do you wish you would have finished? No and Yes. I don't regret getting off the trail. I just didn't have it in me. My friend, Jenny, says "You shouldn't say you couldn't do it, you just didn't want to." No, I didn't do it because I couldn't do it. I'm not going to demean those who completed it by saying, "I could've finished it if I wanted to." Almost every thru-hiker wants to stop at some point in their trip and they persevere (LL). Then there are those hikers who love the trail (Wild Child) and those who demur when they say they finished by saying "It's not like it was hard" (Mr 6000) and those who hiked through sickness (IceAxe). (Let's not even mention my hiker idol, T-Dub). These people deserve the label "thru-hiker." But I do wish I could have finished. I finished California which is a great acomplishment (don't get me wrong, I'm proud of 1,500+ miles that I completed) but I set out to finish the entire PCT in one season- and I didn't do it. But I also know it wasn't a momentary lapse in will. I did the 50 miles from Mt Hood to the Oregon/Washington border and I was glad to get off the trail. I did half of the John Muir Trail this summer (2010) and I was happy to get off the trail then too. So I'm just not a thru-hiker and I'm glad I know that about myself.

Any big adventures planned? I guess marriage can be an adventure. Yep, you heard right. I'm getting married. I got engaged a couple of weeks ago. And you won't believe who... go on, guess... It's Mr 6000 (Jim)!!! This man is amazing. (I actually met many amazing people on the trail (T-Dub, ABear, Avo, IceAxe, Buck 30, Vag, LL) because it's a place that attracts people who follow their dreams.) But Mr 6000 was at the start of a 3 year adventure when I met him on the PCT. Before the PCT he had just gotten back from South America after finishing the Peace Corps. After the PCT (he finished Sept 2009) he took a week before he started kayaking down the Mississippi on September 29, 2009. He started in Minneapolis and I saw him off as he started his kayak trip. After 30 days on the river he came back to Minneapolis and we started dating in November 2009- which derailed his plan to paddle, hike and bike through all 50 states. He now lives with me in Minneapolis. He's the only man I've dated who's traveled to more countries and been on more adventures than I have. He's super intelligent but really down to earth and very close to his family. He's really everything I could want in a guy. His guiding job is over now, so I'm trying to convince him to do the CDT (Continental Divide Trail) next season. He really wants to go but doesn't want to leave me behind. But I can't go; I don't like thru-hiking! But I tell him I'd be an awesome support person! So hopefully he'll spend the Winter doing a paddle around Florida and then start the CDT next summer. I love his adventurous spirit.

I'm very serious when I say the PCT changed my life (I met the love of my life on the PCT). So for anyone who's thinking of doing the PCT- I say, DO IT! You don't have to do it in one season but DO IT! Don't worry about whether you can finish, simply tell yourself you will make it to Kennedy Meadows- then keep hiking; tell yourself that you'll get off after Yosemite- and then just keep hiking. You will learn something new about yourself, you will learn about others and you'll never be the same. Don't let fear stop you- just DO IT! No matter what happens, you will be grateful you tried. I know I am.

To paraphrase the great American proverb: The tragedy isn't that you did not finish, the tragedy is that you never started.

SoloGirl's Guide To The PCT