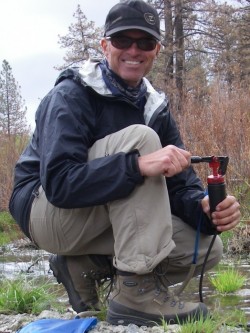 In the spring of 1949 my father attended a Purdue University football clinic. A topic of discussion was the application of petroleum jelly to the feet in order to reduce friction! My father shared this scientific concept with me at age 15 and that is why I started backpacking with petroleum jelly and do so to the present day.

On or off the trail taking care of my feet is a priority and for that reason I have frequent pedicures and purchase quality footwear. I.e.: Hiking boots, casual & dress shoes, socks, liners, and inserts.

In April 2008 I departed the Mexico border and began backpacking on “The Pacific Crest National Scenic Trail” and following is what went down!

My new hiking boots arrived three weeks before the journey. Straight out of the box they were a perfect fit and comfortable. I enhanced this comfort with Superfeet Inserts, SmartWool Liners, and SmartWool Socks. Wearing the new boots I boldly hiked 100-miles of Colorado trail before starting my PCT Adventure!

On the PCT from Campo to Ashland one pair of boots endured more than 1800-miles of adventure. I experienced no blisters or foot discomfort. The boots provided excellent foot and ankle support enabling me to step fearlessly. In the heat of the desert I changed my socks and liners three times a day. Two times daily as the journey progressed. With each sock change petroleum jelly was modestly applied to my feet. Every night the Superfeet inserts were removed allowing my boots to air dry. Following a day of rain or several stream crossings the wet boots continued to provide comfort and later dried as I slept. In the morning I would slip swollen feet into my boots and experienced no discomfort.

In September 2008 I left the PCT trail 1725-miles north of the Mexico border short of my Canada destination. North of McArthur-Burney State Park I improperly treated drinking water and became ill. For ten days the consumption of clear liquids resulted in 5-7 lbs. of weight loss that I would never recover and the reason I left the trail. I’ll be back on the PCT at Campo in April 09’ to attempt the journey again. Look for me at ADPCTKO and on the trail, I’ll be the hiker wearing Lowa Boots and packing petroleum jelly.

Down for Adventure PCT 09’

(Opinions & Observations)Throughout the journey my feet were always clean and somewhat baby soft. A fellow PCT 08’ hiker 400-miles into the journey commented my feet could win a beauty contest. Another hiker at 500-miles believed I had just purchased new Boots. For completing 650-miles in a pair of boots I enjoyed a complimentary beverage purchased by legendary PCT hiker Tattoo Joe. When I left the trail at 1725-miles my Lowa Boots with their soles worn looked and felt great. Boot Comments by: “Wingit” A.k.a. Katie & “Don’t Panic” A.k.a. Jake

Many PCT 08’ hikers in the first 22-miles of trail experienced blisters and footwear problems. This was evident at the Lake Morena ADPCTKO gathering where blister treatment was a common sight and footwear a popular subject of discussion. Up the trail I further observed discarded piles of footwear, footwear mail drops, and continued to see hikers treating their blisters. Off the trail post hike blogs and journals contain photos and commentary regarding the same.

Boots
The Ultimate Trail Hiker
Down for Adventure PCT 09'