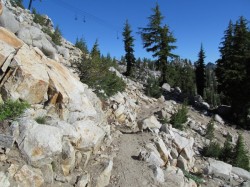 I was up and walking by 6, my last day on the trail for this trip. The day started with a 500 ft drop then a 1500 ft climb to the upper reaches of the Squaw Valley ski area. It's always kind of eerie to walk below non-moving ski lifts. It's always seemed post-apocalyptical to me. The views down into the resort and to Lake Tahoe on the far distance were nice. Shortly after this, the trail crossed Squaw Creek. My guide book warned that this was the last water in 16 miles. So I loaded up with a few liters. Wouldn't you know, but I must have passed 6 nicely flowing streams in the next 3 miles. Who knew? So the trail dropped back 1000 ft, then climbed back up 1000 ft to the shoulder of Tinker Knob (8590 ft). I was getting a little tired from all the climbing and descending until I saw the views that were ahead. I was in for another ridge walk. The PCT once again attained the Sierra Crest and remained there for a couple of miles. There were astounding 360 degree views that really took my breath away. There were still nice views of Lake Tahoe, but the lake was now pretty far to the south.

The trail then began the long drop to Hwy 40 in Donner Pass. I probably ran into 20 day hikers on the last few miles. When I did my PCT segment in 2010, I started at I-80, not at Hwy 40. There is 3 miles that separate the two. There was lots of traffic on Hwy 40 and I could have easily (I assume) hitched into Truckee from here. The problem was that I would have skipped 3 miles of the trail. Even though I considered it, I just couldn't bring myself to skip it. So I had a rather boring 3 mile walk to where I had started before. At the end, there was a side trail to a rest area on I80. I cleaned up in the bathroom and then attemped to hitch from the Rest Area. It was a really weird vibe and I decided after 15 minutes that this wasn't going to work. I really didn't feel like walking the 3 miles back to Hwy 40. There was a trailhead parking area near the rest stop which I tried next. There were only a few cars there and no people. Next I walked down the road, past a ski resort that was closed for the season, then a freeway on ramp. No people, no cars. I was about to walk back to the rest stop and see about calling a cab from Truckee when I noticed a man sitting in a pickup truck on the side of the road. I asked and he agreed to take me to Truckee. Yeah! Once in Truckee, I took the Greyhound bus to downtown Reno and got a room at the Harrah's casino. I felt VERY self conscious walking through the casino dirtier than heck, carring a filthy back pack and I'm sure smelling like death. In any case, I got a room, got cleaned up, then demolished their all you can eat buffer.

So I was able to accomplish what I set out to do. I only now have the last 80 miles of the PCT in northern Washington to finish. I'll try to do this next year at the end of August. Almost done!

Lynn's Blog: Don on the PCT