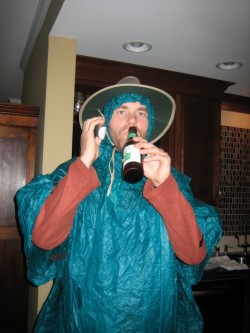 Hard at work with hike preparations

Based on popular requests, or maybe that should be singular (thanks Marko!), I am going to document online my "next adventure." Next adventure, it's how some people refer to my plan to hike the Pacific Crest Trail. I grew up in Packerland and my grandfather even played for them, so maybe it's no surprise that I was raised among a blocking and tackling crowd: study hard, work hard, have a family, settle down and spend your weekends remodeling the bathroom. For much of my life I've followed this route, but somewhere along the journey I've gone terribly astray. I've sold my home plus my car and quit my great paying corporate job, twice, in favor of shoestring international travel and a paltry paying wilderness guiding job. Recently I lived in a rural African village for two years as a Peace Corps Volunteer. Once I even decided that living in a tent all winter and learning to snowboard sounded like a good idea. Amazingly enough it was, so I have to hope that walking 2650 miles across deserts and mountains is another good idea.

I think it will be a wonderful walk, but I'm not without concerns. The main ones are:

- Will I be able to stay healthy? It's a punishing trip with lots of opportunities for injury, especially for my weak left ankle, but just getting worn down is probably a greater risk. Walking 10 hours a day for 5 months sounds exhausting. Hopefully my pig out diet and lightish load will keep up my energy levels. I'll be consuming 6,000 calories a day I think. That's a lot of food to carry, so I'll be consuming a lot of calorie dense fat. I'm glad I like peanut butter. For now anyway. I'm guessing my pack will weigh 12 lbs without food and water. Believe it or not, this doesn't even count as a lightweight load anymore. You have to be under 10 pounds, even 8, to count as a real ultra lightweight backpacker, aka "gram weany".

- Will I be able to stay hydrated in the desert? The first 700 miles lacks frequent water sources. Often you must walk all day, over 20 miles on a few occasions, between water supplies. I have some experience with desert hiking, but never with such distance requirements. You simply don't have the option to go at your own pace. You must reach the next water source, even if it is really far away. Water is super heavy, so ideally I won't have to carry more than 6 liters, but that means cutting it pretty close and arriving at the next source quite thirsty. I plan on starting my hike at first light and resting during the heat of the day, but I still think this will be a hydration challenge.

- Will I be able to cross the high Sierras safely? The PCT rapidly takes you from too little water to too much snow, as you enter the John Muir Trail section of the hike. There are endless discussions online about snow levels and ice axes, but I'm guessing you really won't know until you get there. I'm not planning on bringing an ice axe. They add weight, cost a lot, and really aren't useful unless you've practiced with one in real situations. Unless you can self arrest within seconds, there isn't much point in carrying one, except for looking cool. Supposedly it's a low snow year, so I'm guessing I will be ok with my trekking poles. However, I don't like to make guesses, especially when it comes to safety issues. I can always pick one up in a trail town, but axe or no axe, there will be some tricky mountain passes to cross during June.

- Will it be enjoyable? Since I'm trying to hike it all in one season, there is a risk of getting too focused on getting from point A to B, rather than enjoying the journey. The season is about five months, you can't take more time than that due to snow conditions, so you have to keep racking up the mileage practically every day. 19 or 20 miles a day through the mountains doesn't leave a lot of time for stopping to smell the wildflowers. I wouldn't mind trying to catch a trout on a handline, sit silently for 20 minutes to observe birds, or taking an unscheduled rest day in a mountain town to rest, eat pizza, and drink beer. I think I'll have time for some of that, but will it be enough?

- Will my gear work? Going with a light load means making some serious sacrifices over traditional backpacking. My old Dana Designs pack weighs 6 lbs on it's own. My pack for this trek is just a light shell and my foam ground pad doubles as the frame. I'm bringing a tarp, not a tent. I'll be able to wear every item of clothing at once, so clearly I won't have a lot of wardrobe choices. I'm not bringing a stove. I'll be bringing a tin pan and windscreen for building twiggy fires or using fuel tablets. Because my load is light, I will be able to wear trail running shoes instead of boots. Shoes are much easier to walk in, but they offer less support. I've used all this stuff before, but never for a 5 month trek. Will I stay dry in the Pacific Northwest? Will I be warm enough in the high Sierra? Will the pack be strong enough to carry the load day after day? I suppose I'll be able to replace worn items or things that simply aren't working out as planned, but that will mean wasted time, money, and an uncomfortable problem discovery process.

- Will the logistics work out? Getting food resupplies used to be done by mail, but it less popular today. It is expensive, you are locked into what you are going to eat, and is a general pain for someone back home. The resupply options can make your head spin - there are books and websites devoted to the subject. I'll be mixing and matching my methods. When I'm in a town with a good grocery store, along with my current resupply, I will buy extra to mail to myself a week or two up the trail for towns that lack such resources. At times I'll just take my chances in being able to find enough food in some little town, and hope I have more to choose from than potato chips and candy because the hungry hikers a few days in front of me just wiped the them out of nearly everything.

So those are my concerns. Fortunately, in my opinion, you can't get a definitive answer to any of this by reading, especially online. That elusive needle of quality information is hidden in a haystack of entries written by the biased, misguided, unintelligible, or just plain crazy. Planning is good, but overplanning for something like this sounds like a really bad idea too. Books, Discovery Channel, and cyberspace can only take you so far. You actually have to go out and do something to know what it's all about. I believe I will make all sorts of personal discoveries on this long walk from Mexico to Canada. Hopefully none of my discoveries will echo what I've heard from many of my friends and family, "Why on earth would you want to do that?"