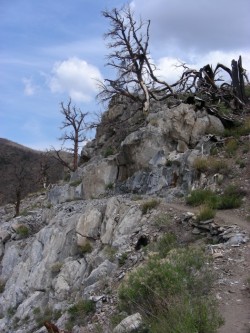 Jellybean did make it in this morning just as we were leaving so we did get to visit with her a little. We talked about the snow conditions in the Sierra and it doesn't sound too bad. We'll get up to Kennedy Meadows tomorrow and get some current reports. She gave us an orange for our lunch and we headed up the trail at 8:30am.

The route today started out with a 6.5 mile uphill, most of which was in a nice pine forest. After a few miles we entered a burned area that extends almost to Kennedy Meadows. We were in the burned area for the rest of the day with only occasional patches of trees that survived the fire. We did have some nice views again, including some snow covered peaks way in the distance. Our first views of the high Sierra.

After the uphill it was, you guessed it, several miles of downhill. All of this was through the burned area and it got a little monotonous. Kind of boring and you just switch into autopilot mode. Head down, one foot after the other, don't step on the rocks, keep it moving folks, nothing to see here. Well, it wasn't really that bad. There were lots of different flowers and we took a lot of photos. There were also many different interesting types of rock. The trail was in excellent shape all day so we made pretty good time.

At about the 12 mile point we came to Manter Creek which was running well. We ate the second half of our dinner and filled 2 liters each. We rested the feet for about an hour and then set off for the Kern River, about 5 miles away, which was to be our camp for the night. We reached the Kern about 7:20pm and there was one campsite but it didn't look to promising. We decided to continue up the little canyon that the Kern, and the PCT, goes through thinking that we would find more camp spots. Big mistake. We ended up walking almost a half mile before the trail climbed up onto a little knoll where we found a place to set up the tent. We were really tired by the time we got the tent set up and crawled into our sleeping quilt.

Tomorrow we only have about 5 miles to Kennedy Meadows where they have showers, laundry, food and most important, news about the conditions in the Sierra and what the weather is expected to do in the next few days. We are also anxious to get an update on how Julie's dad is doing after his surgery.

My feet did amazingly well today. They are sore, and I can feel where the blisters were, but the miles today didn't seem to aggravate them at all. Julie's feet are also doing well. We are wanting to continue straight on into the Sierra and our feet were one of the concerns we had. The other is the weather and we will find out more about that tomorrow.