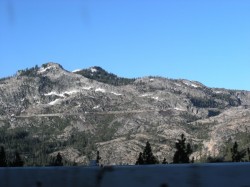 Bill is calling us The Donner Party. I hope we have better luck than the original Donner Party. He made a great breakfast of pancakes, eggs, peaches, strawberries, orange juice and coffee. Right after breakfast it was time to load our packs in the car for the ride up to Donner Summit on I-80. My face was glued to the window looking at the old original Southern Pacific RR line high above Donner Lake. Bill said that if I had time he could drop me off at the old summit tunnel and I could walk downgrade about 4 miles through the old tunnels and snowsheds and then take a logging road down to his house. This is the original transcontinental route built by the Central Pacific in the late 1800's but SP removed the rails from the old line years ago so I wouldn't have to compete with the trains. Man was that tempting, but that's not what this trip is about. Another thing to add to the maybe someday list.

We arrived at the Donner Summit rest area, said our good-bye's to Pooh and the 4 of us headed out at 7:30am. The first part of the trail today was great, once we found it. We took a short trail from the rest area that went about 30 yards to a post. From the post, we took the most obvious trail which is usually the one you want. We didn't notice any PCT markers anyplace. We walked about 10 minutes and it became apparent that this trail was not going in the correct direction. Back to the post, look around some more, see a different trail that looks like it's heading a little more north and try that one. Still no PCT markers and after about 10 minutes this trail is turning in the wrong direction also. Good grief. Back to the post again and NOW we see a pretty good trail heading northwest and, what do you know, there's a PCT marker down the trail a bit and about 15 feet up a tree. Oh well, we put in an extra 0.8 miles.

The trail itself is in pretty good shape but there are numerous trees down across the trail and lots of debris from the winter storms. Kind of what we expected because we are pretty early for this area. At least there doesn't seem to be much snow but, little did we know, that was going to change. Just as we got to the top of Castle Pass my phone rang! I had forgot to turn it off but it worked out good because it turned out to be Rockstar. She was calling to give us a trail report for the area we were heading into. There was one stream crossing that had given her trouble and she gave me some hints about how to make it easier. She also said she was running into snow patches over the trail. Great.

We worked our way down to a large meadow that was very wet. There is a lot of snow melting right now and the ground is mucky and muddy in a lot of areas. We are running into snow patches now but nothing too serious. After a few more miles we catch up to Pawee & Mawee taking a break and we discover that Rockstar is with them. We figured she would be way ahead of us so we knew something was up.

Turns out that Rockstar had gotten into an area where the trail is on a north facing slope. The north slopes hold the snow longer than the other sides because they get much less sunlight. She ended up not being able to find the trail at all because it was buried by several feet of snow. She figured she would come back a little ways to where the trail was visible and wait for us. She knew I was carrying a GPS and thought that it would help us stay on trail. We shall see.

We had a snack and then, with me in the lead, headed on out to see how bad it was. It didn't take long until the trail was no longer visible and we were relying on the GPS waypoints. Now, just so you know, my GPS has Garmin's Topo maps in it and I have loaded a data set that places a little dot every half mile along the trail. The actual trail itself does not show on the GPS. This means that I can follow the basic direction the trail is going but I cannot keep us on the trail exactly. We end up walking the best route over the snow in the general direction the trail is going. We walk for quite a while on snow and it's very difficult and time consuming. Most of us fall at least once, but we are not on any steep areas so nobody gets hurt. We slowly pick our way along the trail and eventually we get to an area that didn't have any snow. Now we make better time until we again get into heavy tree cover. The snow is back and it is very tiring. There are large piles of snow and there isn't really any way to go around them. You end up kicking in steps as you go up each pile and then digging in your heels on the way down the other side.

We make it down to a stream crossing and just before we get there, I fall again. This time in the mud. I have dirt all down one side of my pants as well as on my shirt and probably my pack also. My boots have been wet for some time and now they are muddy also. We finally make it to road 19N11A and there appear to be some spots flat enough to pitch the tent. We do that, have a snack, put on our warm clothes and get into bed. It feels like it's going to be cold overnight.

We are all concerned about the snow but at least the temps are far higher than they are right now in the Sierra. The next few days at least are supposed to be good weather also.

Sounds of Freedom: Nothing today.