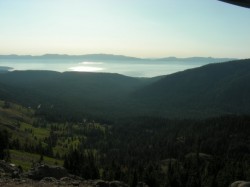 Friends on the trail

The wind did blow quite a bit overnight but the tent held up just fine. It was clear and calm this morning with not a cloud to be seen. We were walking at 7:15am and hadn't gone a quarter mile before Julie saw a coyote trotting through the brush about 50 yards away. He was gone in a flash and I never did spot him. We met another backpacker who was just breaking camp and he is pretty sure he saw and heard a bear during the night. It was a large animal and was hard to see clearly in the moonlight. He heard it first and then saw it climbing up a small ridge above him, snorting and huffing as it went. Just after we left him, we saw a Marmot sneaking around in some rocks about 20 yards away. Maybe not really sneaking because he did climb up on a rock and pose for photos.

After passing Ward Peak the trail stayed high along the ridge top for another couple of miles, giving us occasional glimpses of Lake Tahoe. After leaving the ridge, the trail descended into a nice shady conifer forest. As we were walking along enjoying the shade, we spotted a familiar hiker coming towards us. Rockstar! We knew that she was finishing the Sierra and we were hoping to run into her. She had hiked with us from Donner Pass towards Belden, and had helped us out when Ron had his kidney stone problem above Quincy. She made it to Belden and then went back down to Kennedy Meadows to do the Sierra. It was great to see her and we all took a short break to visit.

After getting moving again, we started climbing back up another ridge where we again had a good view of Lake Tahoe. On the way up we began hearing thunder again and then it started raining. Not heavy rain, but big drops that still got you wet. We weren't getting soaked, and the temperature stayed up so it felt pretty good. Once we reached the ridge top we stopped for a quick snack and enjoyed the view. The rain and thunder made a reappearance so we headed on down to get off the ridge. The highest place around is not where you want to be in a thunderstorm. We only got a little more rain and then it cleared off and we had blue skies again.

Eventually we descended down to Barker Pass at Forest Hwy 3. Nice trailhead here for the Tahoe Rim Trail which is the same trail as the PCT for this stretch. And what's this? A real bathroom? Nice!

Leaving the trailhead, we continue descending down to 7000 feet and start running into more mosquitoes. We were planning to camp at Richardson Lake but thought that may be a little too buggy. We decide to get enough water so we can dry camp about a half mile prior to reaching the lake. We find a very nice spot right next to the trail in the forest. The mosquitoes aren't too bad here but we are having fun laying in the tent watching them getting frustrated because they can't get to us. Hope the SPCA doesn't hear about this.

Our feet are doing pretty well so far. I am going to tape mine up tomorrow morning though because by noon today they were starting to complain a little. The bodies are beginning to feel better and we didn't need to take any ibuprofen until this evening when our backs started stiffening up a little. That goes away also after a few more days.

We are having our son, Bob put together a resupply box and send it to Kennedy Meadows North at Sonora Pass. We will have to hitch the 10 miles down to get it, and then get a ride back, but that will be better than packing 10 days of food out of Echo Lake. We should make it to Sonora Pass next Saturday the 8th so we hope that UPS can get it there by then.

Well, it's 9pm. Hiker midnight. Off to sleep.