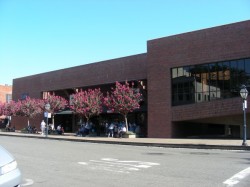 A day in Sacramento

Had a great time at the California State Railroad Museum. Their exhibits are very well done and they do allow photography of the displays. Some of the equipment is open to walk through, so I have now sat in the engineer's seat of Southern Pacific 4294, the last surviving cab forward steam locomotive in existence. After we had seen all of the displays, we went over to a little deli and had a sandwich and smoothie. Then we searched out the Railroad Museum Library, which is in a different building completely. The librarians there are very helpful and I was able to find some very early (1887 to 1916) Southern Pacific Employee Timetables for the Portland, Shasta, and Sacramento divisions. They will make photocopies of them and mail them to me. Very cool!

It was about 4:00pm so we still had a few hours to kill. It was a little too hot to just sit outside and people watch so we did something that we rarely do. We went to see a movie. Actually we went to 2 movies! Julie and Julia (very good, go see it) and The Time Travelers Wife (also good). After that it was back towards the train station to have a breakfast at the Denny's that was right next to the Vagabond Inn. Then we stopped by the hotel to pick up our backpacks. They had very nicely agreed to keep our packs in the office all day long so we wouldn't have to carry them.

We're now sitting in the Amtrak station waiting for the Coast Starlight to arrive. We have about an hour to wait so I thought I would get this written and posted before we depart.

There will be a few more entries coming about our thoughts on our adventure. To all of you who posted in the guestbook, thank you very much. Your support during our hike meant a lot to us, and it still does. We hope to continue our PCT adventure in the coming summers and we will certainly keep a journal when we do so.

We are sad to be ending our adventure earlier than we had originally planned, but if you have been following our trip from the start you know that there were a lot of things that didn't go as planned. We are thankful that we were given the opportunity to give the thru-hike a try and we certainly enjoyed our time alone together to do something we both enjoy doing.

Animal sitings: We're in Sacramento, let's not go there.