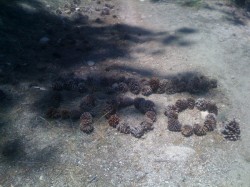 When we got up in the morning, we found that, while the bear canister and my left-over pad thai were right where we had left them, the cookpot full of refried beans was gone. We're not sure what took it, but bear or coyote seem most likely. It's a pain, because we won't be able to cook hot food--it's the only pot we're carrying. We figured we can go for 4 or 5 days just with the cold food we're carrying, so we'll be OK. The trail away from Rock Creek through Rattlesnake Canyon is beautiful. The canyon is very steep so there were sections where the trail was just a few inches wide carved into unstable hillsides. It continued through the deep canyon, near running creeks, and along high cliffs to the Cooper Canyon campground, then up to the Angeles Crest highway (again).

As we were resting by the highway a few guys in a Honda Element passed us, then circled back to check that we were OK. They kindly offered us water, then started interviewing us, recording it on a Flip through the driver's window. It turns out they are starting a YouTube channel about the wilderness experience called HikeitSaveit. (As of this writing (July 10) they haven't uploaded any video yet.)

The trail continued down gently through oaks, pines, chaparral. We passed a spot where someone had made a line and the number 400 out of pine cones--the 400-mile mark from the Mexican border. Then into Glenwood Camp. It's a summer camp (not in use when we were there) with a single building with picnic tables and running water. We hung out there for lunch. A section hiker named Charlie came into the camp. He's a high-school algebra teacher at a private school in LA. He and his wife through-hiked the PCT in 2007. They know Scout and Frodo, our hosts/angels from the start of our hike.

Along the trail, my little engineering mind kicked in and I figured out how to adapt our stove to cook with Hannah's cup, so we had hot food after all. We camped at Sulphur Springs campground--a horse camp. Very pleasant spot. We decided to head back SOBO tomorrow, so Hannah will get to Kennedy Meadows a day early.