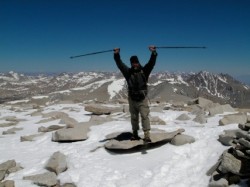 On Summit of Mt. Whitney

I never got into a deep sleep as I was anticipating my alarm going off at 3:30 AM all night. I must have looked at my watch every 30 minutes all night. As planned, I did get out of my bag at 3:30 AM to find my water and shoes frozen with frost covering everything. The Summer Solsiste had brought in some freezing temps at 11,000 feet - first time I had seen these on the trail. I quickly finished my breakfast and packed a light pack with all of my survival gear, including my sleeping bag. Whenever out on day hikes or climbs I like to take my bag in the event of an unplanned bivy. My philosophy has always been that with warmth and water you can hunker down for quite some time. So as always ... my down bag left with me.

With my headlamp on I tore up the trail moving at well over 3 mph. After a couple of hours the sun started to come up and I passed Guitar Lake. Guitar Lake is a real gem. Positioned in the western amphiteater of Mt. Whitney it is surrounded by granite that rises 1000s of feet overhead. The rays of the sun that were coming up were just barely hitting the tops of the natural boundary of the peaks here. The lake makes you feel like you are on another planet as it sits at 11,500 feet - well above the tree line. I didn't stop to enjoy this spot as I had a peak to climb ... but I look forward to returning and spending some time here in the future.

As I passed through 12,000 feet and started across a large icy snow field toward where some of the trail switch backs could be seen up the head wall ... I noticed that the wind had picked up ... and I was getting cold! I quickly put on all of my thermal gear and as I started the switch backs up the head wall my hands were getting numb. The switchbacks were partially covered by snowfields and and snow patches ... but the trail could be easily seen since other hikers had been through recently. The trail climbed almost vertically switching back up the head wall to around 13,500 feet where it reached the Crest Trail and a spur from Whitney Portal to the East.

At about 12,500 feet I reached my first real challenge ... a snow/ice field crossing. When I mountaineer I asses danger/risk on two dimensions - 1) the difficulty of an obstacle; and 2) the consequence of a fall. Think of this in a 2X2 matrix with low and high ratings. So therefore it breaks down like this:

Type I - Controlled: difficulty = low, consequence = low (this is where we all want to climb)

Type III - Risky: difficulty = low, consequence = high (many of the greates climbers spend most of there time here taking calculated risks - as an ultra conservative climber I avoid this regime most of the time)

So here I was midway up the western head wall to the Crest Trail on a summit bid and I find myself in a Type III (Risky) situation. Becuase of the temperatures (still below freezing) and the fact that the head wall was west facing (no sun in the morning) the snow had an icy hard shell. Typically this icy hard shell that goes from freeze to thraw every night at this altitude is penetrable by an ice axe. But due to the extreme cold night/morning and since I was not carrying an ice axe - I did not have the ability to penetrate the icy shell. When I started into the High Sierra I decided not to carry an ice axe in favor of my walking sticks because I was entering so late in the season. This was suggested/confirmed by many other veteran PCT hikers. My walking sticks would only penetrate the icy surface by about a quarter of an inch, thus they were of little or no use as self-arresting implements. The snow field was only about 60 feet across, but was on a 65-70 degree pitch that towered about 1000 feet above a rocky ridge below. This is what made the crossing a type III. A fall here, without an ice axe to attempt a self-arrest, would almost surely result in death. The terrain was just too steep and too hard. A falling climber down this pitch would be traveling at least 100 mph by the time they arrived at the rocky ridge below. While there were foot prints in the ice from previous climbers ... these are sometimes not super easy to follow and step in since you have to retrace them exactly. Furthermore, I didn't have gloves and my hands were quite numb. I had been stopping every 10 minutes to warm them inside my jacket next to my body, but they still hurt.

To add a bit more irony ... a later departure would have given the sun a chance to come up and soften this snow field making it far safer. But since I left so early it was still hard. Typically, one of the most important things a climber takes with them is "time" by leaving early for summit bids. In this case (with no crampons or ice tools) this did not proove to be the case.

After examing the footprints for a time (and warming my hands a bit) I decided to very slowly make the crossing. With extreme focus I crossed. It turned out that it indeed was quite an easy crossing, but it was still clearly a type III situation ... and I avoid these situations as much as possible ... regardless of how easy the obstacle. I like backups to a slip. I have always climbed this way ... and always will. After I crossed and made a few switchbacks ... I watched another PCT hiker fly across the same snow field with no hesitation. This was the first time that this hiker had ever been on a mountain "climbing". He didn't even perceive the danger here. I thought it was interesting ... I guess ignorance is indeed bliss. I later asked him about the "dangerous" crossing ... he couldn't even recall going across it.

The rest of the climbing was safe and controlled - but I kept thinking how much I would have enjoyed having my ice axe. One thing I did for the next two snow fields was reduce the length of my high side walking stick ... turning it into a type of makeshift ice axe. But the next couple of crossings were not nearly as bad.

I did not notice the altitude until I passed about 14,200'. Out of no where I had an extreme shortness of breath. It felt like I was in a straight jacket that was tightening down on my chest. I stopped for about 60 seconds and took deep breaths and it passed. This was the only time that I noticed the effects of being above 14,000' - fortantely, I had spent the last three days above 10,000' so I knew that I would be fairly well acclamated.

I reached the summit at about 10:15 AM. It was amazing. It was still quite cold - but the sun was warming the day quickly and it was as clear as could be. The Sierra to the West and North went on forever ... peak after snow covered peak. To the east was a desesrt plain some 11,000 feet below and the enormous White Mountain on the other side. The summit is a large fairly flat area of large rocks with a Sierra Club hut. About ten other climbers enjoyed the summit while I was there. I took photos and video and left to climb down at around 11:45 AM.

The climb down was without incident and as the sun warmed up the snow it became much safer. My dangerous ice/snow field crossing was now a firm mushy crossing - where my walking sticks could easily penetrate 20" into the covering. Another reminder for me on how important the right gear is regardless of the time of year, and how quickly conditions can change ... for the better and for the worse.

When I got back to my camp at Crabtree Meadow late in the afternoon ... I enjoyed the rest of the day with a few rum 151 sips and a relaxing evening watching the sun set on the longest day of 2009. I thought about how happy I was that I spent this longest day climbing America's tallest peak. And I thought about how happy I was that I was attempting a thru-hike of the Pacific Crest Trail. The pink colors from the western setting sun on those granite peaks that evening will remain some of the most poignant memories from this journey. A great day on the PCT.

"Ad astra per aspera" - Through hardships to the stars. Play Theme