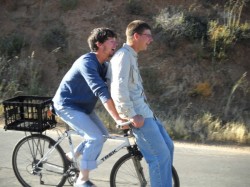 Dan and Joe Takin' a Ride on the Wild Side

The four of us had a nice sleep last night by the train track and rolled out of bags around 6:15. Waited for the grocery store to open up for some breakfast treats and back to the road walking.
Highlights included more memory games, a stop by a small movie set ranch which the talkative owner created with 1950's style diner and gas station, a couple well navigated detours through the hills, and a refresh stop with ice cream at the KOA campground just as we FINALLY returned to the actual PCT.
Mid afternoon we passed through Vasquez Rocks, a very cool region of uplifted sedimentary rocks, where an old episode of Star Trek was filmed. I can still see James Kirk battling the dinosaur creature!!
3:15 and we arrived in the cute little town of Agua Dulce, descended on the Sweetwater grocery for fruit and drinks. We were again fortunate in having trail angel JJ give us a ride to the Sauffley's home.
It is set up as a perfect Hiker Trash refugee camp, large white tents with cots for up to 50, a trailer with shower, TV, kitchen, computer, the works.
After settling in we rode bicycles to town and had a scrumptious large pizza at Big Mouth's where I taught the team how to balance salt shakers on grains of salt. Soon Dan, Joe and Shin were balancing salt and pepper shakers on three separate tables and amazing our waitress.
I taught the guys how to play hearts and Dan shot the moon without trying. Watched a couple PCT videos and to bed after some rather inebriated cohikers stumbled back to camp. Will attach a couple pictures later when I get to the computer. The LCD on my camera went out so I can't review and downsize my pix. Miss you all and home, Six Toed Buford, over and out. (My hiking mates like that name best!)

Sent from my Verizon Wireless BlackBerry