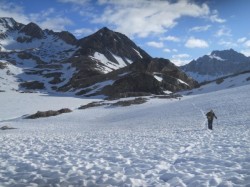 The four of us were right on time for our early climb up Muir Pass
getting on the trail at 5:30. We had a bit of dirt trail for ten
minutes or so and then into the snow fields and difficult
routefinding, the GPS coming in handy a number of times.
We were able to find and lock on to the steps of Team Zero ahead of us
which made the climbing easier. Plus we were able to use our
microspikes; even though it had been a warm night where we slept the
snow got firmer as we ascended and the spikes added to our speed. PCT
journals and handbooks warned of false summits and a terrible grind
but we were up in 2 1/2 hours and surprised to see so soon the shelter
hut beautifully constructed in 1930 with a conical ceiling and
dedicated to John Muir of course. A very inquisitive marmot and
chipmunk live in the little island of rocks around the hut and posed
for pictures. A party of three local hikers had spent the night and
carried monstrous packs, the son looking none to excited.
The way down was very gradual which meant lots of snow and of course
postholing. Graduate went in front and as the lightest of us, maybe
130 dripping wet with a 12 pound pack, didn't fall through too often
and made a bit more stable steps for the rest of us. The GPS helped
guide us as the unseen trail bobbed and weaved through lakes and rocky
cliffs. Evolution Lake was the biggest and out of it flows spectacular
Evolution Creek cascading over waterfall after rocky waterfall.
Eventually at the end of the day we would have to ford that "creek"
which is more like a powerful river this year.
We have forded and waded with trekking poles for balance through
dozens and dozens of creeks in our trail runners but nothing like
Evolution Creek. When we arrive at the banks we spied Team Zero on the
other side trying to dry out. Happy Joe came down and yelled at us
where to cross first to an island and then across the main flow
telling us it would get up to our stomachs. Shin went on one end and I
on the other all four of us locking arms and facing upstream.The force
of the water was tremendous and we all lost some footing at times but
it was Graduate who light as he was would have been easily swept away
were it not for Shin and Mountain Goat's arms on either side of him.
It seemed to take several minutes in the excitement and scariness of
it and felt wonderful reaching the safety of a stump 3/4's of the way
across. Happy Joe captured it all on videotape so we'll have a chance
to see the drama ourselves.
Visited with Team Zero (Ten Spot, now renamed Kern after the river he
sadly tossed his pack into after the Half Ounce pulmonary edema
rescue, Happy Joe, Sticky Fingers, Cubby and Boston) for a bit and
then hiked just a mile to a lovely campsite by E Creek, complete with
two plank benches. Graduate is in a hurry to get to VVR and said he
was "tired of mooching food off of us" as he had only packed for a
five day trip rather than seven which is what we'll be. He joined up
with the Zeros who are going to do a little night hiking to get closer
to the next dangerous ford, Bear Creek, 17 miles away. Dinner and
conversation around the campfire MG built and we're off to bed.(I
should probably mention my uncomfortable sleeping situation with my
Thermarest mattress hemoraging between its baffles which creates the
sensation of sleeping on a beachball by my knees and no padding by my
hips; hope to get a replacement within the week)
Tomorrow the easiest of the Sierra passes, Selden at 10,900 ft and try
to get close to Bear Creek for the following morning crossing.
Vermillion Valley Ranch on Sunday, Shin's birthday!


--
Sent from my mobile device