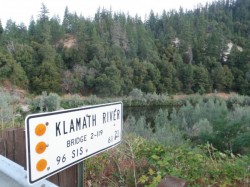 Down, down down to the Klamath River Where Our Family's Rafted

You know you're not my favorite state but that's because of SoCal. Did
you have to try to kill me off with my last full day in Northern
California?!?
Hell is a real place and it's the twenty miles coming out of Seiad
Valley on a hot day. Yogi calls it the hottest town on the PCT and I
second that, third it and fourth it. 93 degrees in the shade and 10X
in the sun and that was AFTER climbing 4750 ft up and hiking the 6000
ft ridges where it's supposed to be cooler at 5:30 in the afternoon! !
For only the third time this trip I had full on swankles, sweat
pouring off my head and upper body, saturating my shirt, then slowly
progressing down my pant legs saturating them down to my ankles.
Topping off the enjoyment were swarms of the gnats/flies buzzing
around my head landing on my nose, my temples, dive bombing my eyes
and occasionally getting inhaled. They are infuriating, have earned
many choice epithets, and seem to like it best in the forests with oak
trees. Maybe they breed in the decomposing leaves. Nasty buggers!
I started hiking early at 5:30 to get a jump on this notorious hot
stretch and was rewarded with my second bear sighting, a big black one
lumbering across the road in front of me fresh from fishing or having
a drink in the Klamath River to which the trail descended. 6.6 miles
and I was in scenic downtown Seiad Valley which consists of an RV
park. And a building which houses the PO, the store and the cafe.
While I waited for Ben, the RV park owner to rise and get my resupply
package (he had "been up till 2:00 am last night"), I feasted with
Cheeseburger at the cafe: ham and cheese omelet, hash browns, english
muffin with butter and jam, belgian waffle, side of patty sausage,
large OJ, coffee and lots of water. It was fantastic and fueled my
climb up those nasty 4700 feet. Also saw Raspberry and Belgian
boyfriend Live Yeast whom I'd given a ride to at Mount Shasta.
On the trail I saw no one until running into a nice Seiad couple in
the late afternoon with their two horses and a pack mule named
Florence (Flo). I took a picture for Nicola and gave Lucy Mule's
regards to Flo.
I was so hot hiking that I felt like I did when running the Sound to
Narrows race unprepared (like a bullet proof twenty-something does) on
a 95 degree day and collapsing of heat exhaustion after crossing the
finish line and waking up on a stretcher going into the triage tent
they'd set up. The same aching in the chest from breathing too much.
Anyway I'm alive and glad to have done 27 today because I'm only 44
from Ashland and can do relatively easier 22 mile days to arrive Wed
night. Met Johnny Appleseed who has great hiker trash flair and
Machine, a nice southbound gal from the Bay Area at Bear Dog Spring
where I'm making my camp for the night. Tomorrow the Oregon border at
long last!! I'll be so glad to be back in the PNW counting down the
miles from 950. May the force be with you. Live long and prosper.


--
Sent from my mobile device