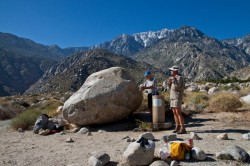 Wow, did we sleep well last night, even with the wind. We finished off the descent to the drinking fountain and took a long break. It was a few more miles to the Interstate, mostly hiking in drainages with soft sand. The wind continued to blow strongly, keeping the heat at bay. Under the interstate there was a little party; angels had left cold drinks and salty snacks. The interstate marks the end of the guidebook section. It also means we've completed about 200 miles. Only 2450 to go! Woo-hoo! This point is also the second lowest point on the PCT at 1180 feet above sea level. For the next thousand or so miles, it's all uphill. We continued around a small community north of the interstate to a wind farm. The employees are nice enough to allow hikers to stop for water. The group we were with all turned in there, as the day was warming up nicely. The wind farm guys not only had water, but food, sodas, and ice cream for purchase. As the PCT logbook read, 'I'd walk 200 miles for a Klondike bar!' After hydrating and digesting our lunch, it was back into the foothills of the San Gorgonio/San Bernadino Mts. We went up and down drainages dotted with brittlebush (just past its flowering prime and still lovely). We eventually dropped into Whitewater Canyon, home to a trout farm and a permanent stream. We walked most of the way up the drainage before deciding to camp. It was nice to have a stream in which to rinse off the worst of the dust and sweat. After dinner, Yeahbut spotted 3 bighorn on the ridgeline above us. With views of snow-capped mountains ahead and behind us, it was a perfect place to be.