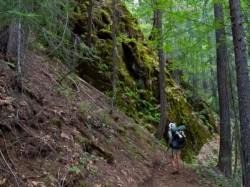 We started before dawn again this morning. We knew we had a lot of climbing to do (about 3000') and expected warm temps again. The first 9 miles were pleasantly cool as we passed a series of streams. Yeahbut slipped off a rock on one crossing, soaking his feet; if it had been me, I would have probably sat in the stream! We loaded up with water (about 5 liters each) for the climb. We expected to dry camp, since it was over 15 miles to the next sure water. It's been a wet year, so we figured we would drink whenever we did find water but wanted to be prepared if we didn't. We actually found a few trickles. We met 6 other hikers today heading northbound. Joaquin, a section hiker, and a group of weekend hikers. We got lots of reports about the snow we'll hike tomorrow. Let's see...one person said he cut steps at one point with his ice ax. One described it as awful. All described very hard-packed snow. We partly wanted to go on today and thru the snow at the end of a day of heat/sun. It would have meant a 23+ mile day, and doing the snow when we're most tired. Instead, we'll start a bit later tomorrow and hope the snow has softened a little when we get there. The trail deteriorated today. Lots of downed trees to navigate around. One that we had to go over had a diameter of at least 8 ft. We saw 3 snakes today, too. 2 rattlesnakes. There were lots of flowering shrubs that we waded thru on the ridge. We've contoured around Grizzly Peak and had wonderful views all afternoon. The views are what we love best about the mountains.