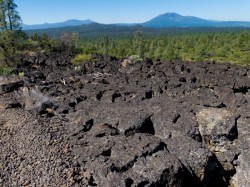 The heat finally let up enough to sleep. But did you know that Canada Geese honk all night? There were some on the lake below, waking us with their 'chatter'. On the trail at 5am again. We stopped at the Crystal Lake Fish Hatchery to get water before the hot climb ahead. They really don't have a drinking water source...no spigot, drinking fountain, bathroom sinks are designed to make it difficult to fill bottles (small, shallow basin). One of the workers warned us that they couldn't guarantee the potability of the water, but we needed the water... We climbed up a series of lava flows. Initially, it looked a lot like the meadows around Flagstaff: grass, lava, occasional small pine tree. We ended up high above surrounding landscape on cliffs of lava. We had great views of Mts Shasta and Lassen, both still heavy with snow. After about 15 miles, we arrived at Cache 22 (so named because it's on Road 22). There's a brush shelter with chairs and water. It's a heavenly place to wait a few hours until the afternoon heat starts to fade. There's a rattlesnake here who keeps trying to share the shade with us. It approaches from one angle, then another, then gets annoyed that we're here. It rattles, backs off, and tries another approach. We have a few more uphill miles to do yet today. If we time it right, we won't have to do as many hot miles to get off Hat Creek Rim tomorrow. Well, we and the rattlesnake left the shelter at 4:30. It was still hot as blazes but there was the promise of it cooling off. We hiked uphill thru increasingly barren hills to the remains of a lookout tower. It's metal supports now house communication equipment. I still don't have cell phone service, even with the tower and the clear shot to surrounding valleys/hillsides. We're camped along the rim in a quasi-liveable site. With all the lava and brush, there's not much choice. But we have some fantastic views up here. Sunrise on the mountains tomorrow after a night of star-filled skies...who could want for more?