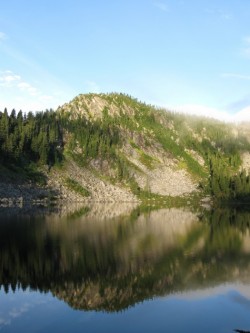 And Then There Were 2

Mice running all over last night. Running on the fly, in between the tent and then fly and all over our backpacks as indicated by the remaining turds in the morning.

Went over to let Sugar Moma know that we were heading out and she said that she was going to head back because of her knee was hurting her. We reluctantly said goodbye and headed out of camp. Left a note on the trail for Canadoug about our destination for the day.

We didn't get very far up the trail before we found Cadadoug popping out of his hammock. He hadn't been sure about the trail down to the lake so had pressed on. He informed us that he was going to head back to the pass also. His feet had been rubbed raw by his wet shoes and he planned on taking 2 days to get back to the pass.

We felt good enough to push on so again we reluctantly sad goodbye with big hugs. Got a slower start because of all the goodbyes so we only had 6 miles in by lunch time. We pressed on and climbed out of a canyon and about half way up the trail was absolutely covered by brush. And of course the brush holds lots of water. Not to mention that was also raining lightly. So, we were soaked in no time. Feet and clothes.

We hiked along a ridge and spotted a very regal and wise-looking marmot sitting out on a rock. He or she had a big body with a white top and darker bottom. Not long after we ran into a family of ptarmigans. Canadoug taught us that ptarmigans are smaller than grouse. We didn't rush them so that we could watch them for a while.

Not long after we reached Sally Ann Lake it started raining pretty good. We hiked on looking for a descent campsite. We even had to stop, get out the map and compass to figure out which trail we should take. It was getting late so we decided to push another 1.3 miles to Indian Pass where the guide book described a good campsite just off trail. When we got there we found it occupied by some hunters and they pointed us across a meadow and said there were spots over that way. Their spot was perfect and under the trees but they didn't offer to let us stay.

We trudged through the meadow dodging the mule shit and getting a little worried when one of them started to follow. After crossing a small stream we found a campsite. We set up the tent as quickly as we could in the rain. We also had to figure out the best way to get in the tent without getting out wet clothes all over the inside of the tent. We'd been hiking long enough in the rain that out rain jackets were totally saturated.

After taking off our wet shorts, sock, shoes, and rain jackets we jumped into the tent. The next few hours were spent trying to mop up the water that was leaking up from the top of the ground sheet through the bottom of the tent. Additional water needed to be mopped up from wet plastic bags, rain fly opening, and wet edged sleeping pads.

After hours of searching out water droplets, worrying about how to keep dry, whether to hike on or turn back, Gino had thoroughly burnt himself out. Lion Heart held it together for the team, and asked Gino if he had any plans for the next day. Moments later he was snoring away , only to awaken hours later not knowing where he was or who was in the tent with him, but had a very clear instinct that he wanted to get warm and cuddle.