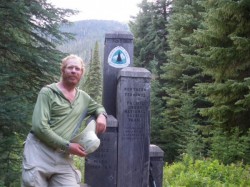 Another cold night and morning! Just pass the spur trail to Slate Pass I saw buck. He was really skinny and didnt look that good. However I did see two doe today that looked really healthy. Today was the day of passes! I crossed Buffalo, Windy, Foggy, Jim, Holman, Woody, Hopkins and Castle Passes. Climbing out of Holman Pass, I saw my first Spruce Grouse. It was windy and chilly again today. It started to snow on me again as I crossed Woody Pass, and looking North, I saw rain and snow falling in bands along my intended path and into Canada. That is right. I was finally looking into Canada! That reminds me of a joke:

When it was time to name Canada, the government was really broke. They could only afford 3 letters for the name. So, they took all of the letters in the alphabet and put them in a hat. The leader of the naming committee drew the first of the three letters and said, It is a C, eh...

The trail after Holman Pass became increasingly rougher, and less well maintained. Also, It became less well marked at the trail junctions and there were no PCT signs on the trees to assure me that I was going the right way. The junctions at Hopkins Pass are not labeled at all, and neither is trail 749 at either junction near Castle Pass. I knew I had a long way to go today and it was really hard not to stop and eat huckle berries that I found in the clearings past Castle Pass.
I stashed my pack at little camp spot at 3.2 miles from the border, grabbed my camera, trekking poles and a couple of snacks and walked down to the border. Going down the final switchbacks I heard voices and hustled to get down their before those people left so that they could take my picture at the Northern Terminus. Who did I see, but Marmot and Trail Dog! I hadnt seen them since Snoqualamie and I knew that they were going to bounce forward to Rainy Pass (?) to hike up to the border and finish their 2005-2010 section hike of the PCT. Today they were remarking that they were surprised that I had not caught them yet. Well I did, I guess, just at the last moment before they disappeared into C-land! After photos, Trail Dog helped me remove the top of Monument 78 to get to the trail register. That sucker is heavy. I signed in, bid farewell and then backtracked up to the camp where I left my pack. After setting up the tent and eating I was amazed at how tired I was. Yes, It was a long day, but I think that part of my tiredness was due to the emotion of finally getting to Canada. All I have to do now is a 65 mile leg from Kennedy Meadows to Crabtree Meadows and I will have done the PCT in sections from 2007 to present.
I slept with the netting open in my tent to increase air flow, and a mouse came into the tent! Of course, it panicked and instead of going out the front, it ran to the rear of the tent. I put on my gloves because I did not want to get bitten, and when I would try to catch it, the mouse would jump up onto the mosquito netting and then bonsai onto me, then jump back onto the floor of the tent only to jump back onto the mosquito netting. We repeated this several times until I moved to the side. On the mouses next jump it made it past me and then forward out the door of the tent! I zipped up the netting and decided it was better to risk condensation then to repeat that little rodeo!