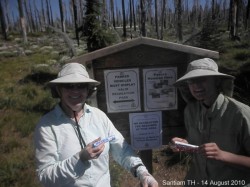 It all comes to an end

Woke up around 6:15 and it was relatively warm - in the mid-50's already. Flash ate a cold breakfast, and I prepared what is probably the last oatmeal for awhile. We packed up and were on the road by 8:15. Already vehicles were coming down the road to pick up campers, as the camping session was ending today.

Flash was in the lead and has developed into a really good trail finder. We hiked past an 'established' forest service camping area, complete with motor homes. The PCT was clearly marked no trucks, cars, four-wheelers, motorcycles/bicycles in many places. Additionally, the trail is used as a cross-country trail in the winter, and laminated copies of routes are affixed along the way. About 1.5 miles south of the Santiam TH, section hikers, who shall remain namelss, told me they were planning to camp at Wasco Lake. Thinking that maybe they were thinking of a different lake, they reiterated that it was by Three Finger Jack. I had to pull out my maps and show them that they were going in the wrong direction. Apparently they were not familiar with the sun rising in the East. They carried no map. Of course, they were very appreciative when I set them straight.

Flash continued to set a fast clip and was waiting for me in a burn area about 1/8 mile from the pass. As we approached Hwy 242, we saw two coolers and some empty water jugs. The larger cooler was empty, but had a PCT hiker journal. From that we learned that Yeti had been through on Tuesday, and that our Wasco Lake hikers had not only helped themselves to the sodas for PCT thru hikers, but left a thank you message in the log book. We left messages, but took no sodas. Just as we were preparing to cross the busy highway, along came Jessica and Rally. Jessica started in Ashland and Rally at Campo. They were meeting family at the Santiam TH and going to Sisters for a few days.

We were able to safely cross the road, and Flash delivered us to the TH by 10:30 AM. This is quite a nice TH parking area, complete with updated potty, garbage can, picnic table, etc. Ordinarily it requires a permit to park, but this being 'Back to School Weekend', parking was free.

We met some men who had climbed Mt. Washington yesterday, and now were preparing to explore a nearby cave.

Flash and I had a celebratory picture with candy of our choice, and then relaxed until her dad arrived at 11:54 AM. After a lunch stop at the Dairy Queen in Redmond, and a potty/liquid refreshment stop at Biggs, I arrived home at 5:30 PM, to three cats, who seemed as happy to see me, as I was to see them.

Back On The Trail

Life is an Adventure on Two Feet.
Who is Clippers who hikes?