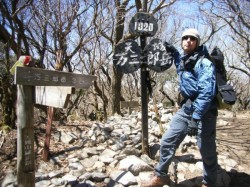 Every time I leave Japan, I swear I won't be back.

I've left three times now, not counting short trips home when I was living there, and I don't make that promise anymore. I know I'll be back, though I'm pretty sure it'll take a long while. I was last there in May 2008 and left in my usual state: beaten, despondent, resigned to never really belonging there. But I owe the country a lot. It was where I discovered mountains (Japan is over 70% mountainous), and long-distance hiking, and, on a little peak just west of Tokyo, took my first step on the mountain pathways of America that have assumed such an important position in my psyche and my life.

I suppose it's a bit weird to be talking about Japan in this most western of forums, but I need practice in using Postholer and a way to alleviate the endless countdown (88 days remaining) to my departure for the PCT. And I gather that American readers of a hiking persuasion are starved for diversion during their snowbound winter, so here we go. I thought I'd spare said readers a prolonged description of my gear and preparations (for now!) and instead talk about how I ended up devoting half of every second year to dragging my dusty arse along various American trails for no good reason.

Anyway, it was late-1999 and my life was at an all-time low. I'd busted up, irrevocably, with the mother of my young daughter. I was living in a caravan (trailer) on a 600-acre hunk of farmland in the hippy country of northern New South Wales. My landlord was an orange-clad Indian Ananda Marga sect guy who answered to 'Dada'. I was unemployed, pretty messed up; I enrolled in a forestry course, dropped out, fled to my parents' in Brisbane. Opened the newspaper one day: an ad for English teachers in Japan. I liked English; had been briefly obsessed with Japan as a teen. A couple of months later I stepped out of the plane at Narita. I had, if not a purpose, at least an interesting diversion from the disaster zone of my personal life.

I was only going to stay one year. But sometime in the first year I decided to buy out my ex and her sister from their shares in a big piece of land we owned in southern NSW. It became two years, then three. The job nearly sent me crazy. Tokyo - the people, the noise, the pace, the craziness, the pointlessness of my existence - was not the place for quiet introspection. One day I took the train an hour or so west and hiked up Takao-San, a holy mountain 600-odd metres high, clothed in shady cedar forest and peopled, it was said, with mountain goblins called Tengu. I never got to meet a Tengu, unfortunately, but I became intimately acquainted with Takao. In those three years and on subsequent visits I climbed it well over 20 times. It's one of my favourite places on the planet.

I got hooked. Explored the Okutama, Chichibu and Tanzawa regions surrounding Tokyo every weekend. With Japanese efficiency I would get myself to some trail starting conveniently at a train station, hike a loop up into the hills with a convenience-store lunch on the summit or at a temple or shrine en route, and hike down a few hours later to another station a few stops along the line. If I was really lucky, a hot-spring bath to soothe tired limbs and watch the Japanese at their most...Japanese. Then a doze, with hundreds of other dozing passengers, as we were conveyed back into the neon belly of the beast.

Japan took a heavy toll; I was seldom happy there, and when I was it was either laughing myself into a drunken stupor with like-minded gaijin misfits, or on some lonely peak, the only non-Japanese in miles - sometimes the only PERSON in miles. I discovered the satisfaction of hauling oneself up and over an apparently insurmountable obstacle, the serenity of high mountain and deep forest, the joy of self-reliance, the secret pleasures of solitude. I found remote temples, isolated villages and weather-beaten shrines unseen by most tourists. It was most certainly addictive; I would think about mountains ('yama' in Japanese) at work, read about them, write exaltingly about them in journals. In three years I did 50 trips, and they're all recorded in tiny, pencilled script in beautiful black leather-bound journals (nice stationery in Japan!).

I'd found myself a purpose - an utterly pointless purpose, but you take what you can get...