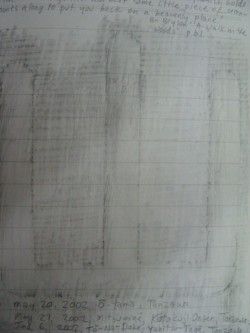 Pain Is My Sensei

It was on September 2, 2001 that I decided that a career would have to take second place thenceforth to my growing obsession with mountains. The site of my revelation was Kawanoriyama, in the Okutama region west of Tokyo. A small peak (1363.7m - trust the Japanese) clothed for the most part in forest. I was enjoying one of my first stealth camps - though I didn't know the term yet - right there on the summit. My journal entry records my mounting impatience for the other day-trippers to go home and leave me alone. I was in the grip of a giddy fit of proprietorship: This was MY mountain! Finally, after killing the time cooking, taking a rubbing with a pencil of the 'yama' component of the name on the summit sign, and filling the pages with my manic scrawl, I had the top to myself. The sun was going down. Deer made startling little yelps in the woods, a pair of marten-like creatures darted up the slope, oblivious to the trespasser at the top. I set up my tent and spent a blissful evening staring at the stars - stars you seldom saw in the smog and neon of Tokyo. Somewhere there I had my little epiphany.

It's important to honour your epiphanies, I reckon. I'd been reading Bill Bryson's 'A Walk in the Woods' and suddenly my mountain fever took on a new and decidely non-Asian dimension. America! Why hadn't I thought of it earlier? I'd been there once before, a 1993 road trip in which I'd spent as much time fighting with my then-girlfriend as chewing up the 10,000 miles we covered in two cars - the first of which we killed and dumped in Flagstaff AZ, the second rolled and wrecked in rural Wisconsin after a high school student ploughed into our rear. That was the end of that trip (the relationship wasn't far behind). Bryson's book, of course, concerned the Appalachian Trail, two words that sent an immediate thrill of electricity up my spine - and still do. (What a beautiful word: 'Appalachian'). (What an excellent word: 'Trail'). I hadn't exactly been enjoying my work. I lived for the weekends and holidays. My thoughts went along these lines: "I will never put security, a career, before the pleasure and satisfaction I feel doing this. And I will start researching the A.T." With the job I had then, dragging English words out of oft-immovable Japanese mouths, I didn't feel too bad about reprioritising.

I suppose I was scared that, when I left Japan, I'd be leaving all this beauty, this satisfaction and peace, behind. I didn't know what I would be going back to but I knew I didn't want to end up like those poor wretched salarymen that used to drift into the conversation schools in the evening like empty insect carapaces on the breeze. Worn-out wage slaves blowing 12 hours or more, six days out of seven, on duty to The Company. Seldom seeing their wives or kids. Forced to drink themselves stupid after work with colleagues, customers, bosses. Trapped in their awful cubicles, their suits and ties, devoid of even a speck of individuality. God, I pitied them - we all did. Japan was great for making things clearer. All the stereotypes and contradictions are larger than life there.

So. Mission #1: Avoid a career from which you can't escape. Mission # 2: Hike the Appalachian Trail.

I've made a pretty good job of #1 so far. I teach English as a foreign language in a school in Brisbane, and every couple of years I take off and reconnect with the mountains and the woods and the excellent community I've found therein. It hasn't been without cost. I don't have a house, most of my friends earn a lot more than I do. And I've had to endure injuries that would have saner folks seeking a safer hobby. Compartment Syndrome. Stress fractures. Ilio-Tibial Band Syndrome. Chafing like you wouldn't believe! But the trade-off is the release, the awesome adventure, the joy of the epic journey. Every time I do it I feel reborn. And I seldom wear a tie.

I continued to explore the peaks and forests and rugged coastline of Japan. North Alps, South Alps. Mt Fuji, highest peak in Japan (3,776m) from the bottom. Occasionally with a friend but more often alone. I nearly got killed in a fall, got my sorry arse lost one long and memorable night, had my first alarming encounter with snow. Freaked out when I "met" (as the Japanese say) my first bear. I made a hell of a lot of mistakes and carried WAY TOO MUCH gear. Looking back through my pictures to decorate this entry, I was utterly aghast at the stuff I used to wear and carry. I would guarantee I carry half the weight and am twice as comfortable nowadays. But I had to learn all that myself. I walked alone, mostly, and there wasn't much English to be found in the outfitter stores. Painful experience is an excellent tutor.