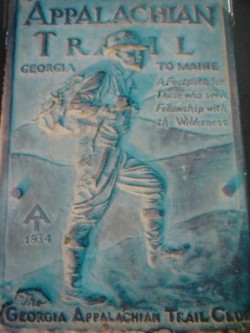 "It's been a trial just getting here to the official start of the south>north A.T. trek, but I'm here, I'm fed and I'm warming up after a chilly hour outside cooking in the darkness. And already, before my first official step, bear dramas...Some commotion earlier as the people at the shelter shooed off a canny bear that somehow managed to penetrate their defences and get someone's food down. So the message is: Be vigilant and bear-wary, always. Apaprently last night a bear got someone's rope-hoisted bag down..." (My first journal entry, Appalachian Trail)

But the bears were the least of my worries. True to my pledge on that Japanese mountain-top, I'd left the country early in 2003, done a course to qualify to teach English as a Foreign Language in Australia (where the standards are somewhat higher than Japan) and immediately begun teaching at a large English college in Brisbane. All my remaining savings went on the course fees, but almost exactly a year later I decided I had enough cash to feed my AT obsession, flew to Sydney, got the necessary visa at the consulate, and via a tortuous series of flights (Brisbane>Sydney>Los Angeles>Chicago>Atlanta) and a Greyhound bus ride into rural Geogia that induced more fear than a mere bear ever could (some of my most terrifying American experiences have occurred on board Greyhounds, amongst what one Trail friend nicknamed "the salt of the earth"...), found myself at last at the hallowed southern terminus of the 2,175-mile journey of my life, Springer Mountain. After all that travel and preparation, I figured the worst was over. God, I was naive.

I'd learned a lot in Japan but I was still as trail-dumb as they come. On my back: a great heavy Australian mountaineering pack, ribbed with aluminium stays, loaded to bursting point with reassuringly, kneecap-grindingly heavy GEAR. I thought I'd learned SOMETHING in Japan, where my first big pack was (I later learned - all the info was in Japanese) a ski-touring back-breaker, and my second a mammoth, sexy, god-awfully heavy Gregory 'Denali' mountaineering pack. Fire-engine red, so my suffering would be visible for miles around. I'd actually DOWNSIZED for the AT, but was still carrying twice what I do nowadays. At first I didn't notice, such was my joy, the awe I experienced trudging through the gorgeous north-Georgia woods, high on the Bill Bryson propaganda of 'A Walk in the Woods'. Those first few weeks were hard but wonderful; pencilled notes in my Data Book record the highlights: first skunk (Blood Mtn Shelter, Night 2), first rattlesnake (Cowrock Mtn, Day 3), first hitch-hike (into Hiawassee, Day 5), first meeting with now-friend 'Skittles', (Muskrat Creek Shelter, Night 6), and with now-friend 'Utah Mike' (Winding Stair Gap, Day 9). I entered the mythic Smokies on Day 13, still feeling great - but I think if I went back there now I'd DANCE through compared to some of the laboured days I endured on such relatively easy terrain.

It was Day 13, I think, when I encountered my first black bears, a mother and three cubs bolting from the Trail; I was too delighted to be truly startled. But it was Day 15 when I met the hikers who would be my closest companions for this, my first seriously LONG hike. A long, hard, humid Smoky Mountains Day 15 delivered me at last to Pecks Corner Shelter, a hut jammed with about a dozen wet and apparently miserable hikers. I could barely fit in, but a sweet young Tennessee native called 'Monk' and her boyfriend, 'Snatchy', from South Carolina, welcomed me and made room. We hit it off and became a tight little team. I could try to describe our connection but I'd need space, and time, and it would still be a tough job to capture our rapport, the laughs, the bond we nurtured in the ensuing weeks. Hard work, sometimes, being the third wheel, hiking with a couple and all the stresses that entailed for the three of us, but most of my memories are happy ones. We dodged Trail Crazies, helped each other out, told stories as the miles went by. But God, the laughs - I have always enjoyed the company and sense of humour of Southerners. Snatchy used two wooden sticks: one a crooked branch, the other a sawn-off mop handle. One of my favourite memories is of him collapsed in laughter onto his sticks, GUFFAW-ing with honest, hearty laughter at one of the Trail jokes or impersonations we would do to pass the time.

The laughs quickly dissipated on Day 22:

"Today was a long and awful day...I limped and struggled all the way from Spring Mountain [Mile 177.9]. It's my legs, the lower part of the shins, just above the feet. I think it must be the tendons, though a woman here at the shelter says it could be "shin splints"...Whatever it is, it hurts like hell, as though someone's kicked me in each shin with steel-capped boots...".

Ensuing days were a nightmare, long and miserable, too slow to keep up with my comrades, progress possible only with a heroic dose of Ibuprofin. I would be walking happily through the woods when suddenly: WHOOSH! A jolt of awe-inspiring agony would shoot through one of my legs, from ankle to shin, causing me to yelp like a coyote and rendering forward movement utterly impossible. Only my trekking poles kept me standing; I would be in a sweat, tears of pain trickling down my cheeks. After a few days it had spread to both limbs. I remember limping into No Business Knob Shelter, Tennessee, late one evening, to a round of applause from my friends. Next day we made it to Miss Janet's hostel in Erwin, and relief at last. By a fortuitous coincidence such as only the AT can deliver, Monk's father was an orthopaedic surgeon; he picked us up and drove us to their home in Kingsport, where we gorged ourselves on the true Americana of Krispy Kreme donuts and re-supplied within the awe-inspiring cornucopia of junk food that is Wal-Mart. More importantly, I now had a name for the agony that I was terrified would shortly mean the death of my A.T. dream.

"Steve looked at my feet and legs and diagnosed 'Compartment Syndrome', in which the tendons swell against the walls of the "compartments" that enclose them, resisting blood flow. The 12 Ibuprofin I'd been taking each day, rest where possible, elevation, a dunk in a cold stream, were the prescribed teatment. I went to bed relaxed, relieved and very well-fed."

Our little team returned to the Trail the next day, after a late night of repacking our Wal-Mart treasures, and the joys of shower and bed in that beautiful house, and for the following weeks, breakfast, lunch and dinner began with an appetiser of four Vitamin I. They were the only reason I was able to continue as far as I did. I'm a slow learner, but even I was beginning to realise, as the miles and the adventures unfolded, that the massive load on my back was taking a heavy toll on my long-suffering knees, and that even a 2,175-mile epic journey should be more FUN than suffering...

[Note: My pictures for my A.T. entries were taken on film. I don't have a scanner, so for now I'm just using photos-of-photos...]