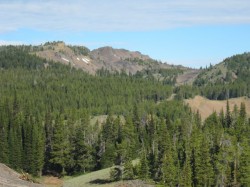 Some pre-trip planning and conditioning

This PCT section hike was planned to take me through nearly the full extent of the Sierra Nevada range. I began the planning of this hike only a few weeks before leaving home, necessitating simplified preparations. I used the PCTA web site to start and only had time for a small glimpse of the larger PCT online world. I had an outdated copy of the WP PCT guidebook for CA (read it, did not carry it) and used Craig's PCT planner to lay out the trip with my resupply stops and extra side hike excursions factored in. It instantly foretold my future for 2 1/2 months and some +/- 900 miles. Looking at map options (I don't carry a GPS), decided to use the "Halfmile" maps as they were easily and quickly available. I printed them out to send in my resupply boxes , but also acquired the USFS PCT map to take along as reference. There are many varied Guide and Map choices out there for the PCT and I saw hikers using most of this variety at one time or another on the trail. I am particularly interested in Geology and would have obtained some guidebooks and researched the route, if I had time to do so. I saw a few folks carrying natural history guides, some with maps and guides loaded into their Iphones, ect. Obviously there is an incredible variety of interesting things to observe when you are out there all day, day after day.

I set the itinerary up Southbound so that the higher elevations and greater gains and losses in elevation would be done in the second half of the hike. I took some time in route to CA to do some conditioning in my old backyard near Wenatchee, WA. After 10 or so days in WA, running up Mission Ridge several times, I was ready. Burney Falls State Park was picked for a starting location because of its position at the North end of the Sierras and logistically it was very easy to get close to, via public transportation through Redding, CA. I elected to fly from Wenatchee via Seattle to Redding, however Redding also has train and bus service from the North and South.