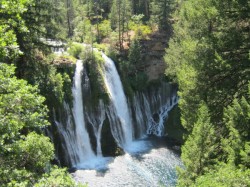 To Burney Falls and a beginning

The commuter bus from Redding to Burney runs M-F with a departure in the morning which I boarded and arrived in Burney in time for lunch. This is a scenic one hour plus ride and very inexpensive. Trail luck started early on this trip, as I was just getting out a "PCT" sign I had made to attempt a hitch up to the park, when a Burney Falls ranger pulls out of the store lot and offers a ride. He was on his way to start his work shift. With time to spare, I walked some park trails and went down below the falls to relax in the cool mist. Burney Falls park is very hiker friendly and a camping area along the PCT is reportedly stocked (during the migration season) by a trail angel. The high temperatures here ( it was something like 112 at Redding, down in the valley this day) had me thinking about my route and timing for crossing the Hat Creek Rim in a few days. This was a tremendous snow year for the Sierra, and my schedule and direction was intended to get me through the high Sierra in September when any trail snow would be mostly absent and so would the biting insects. However, lingering snow was a concern for me right now in the Northern portion of the range as the elevation got higher around Lassen. I had held up a bit to start so I would have a chance to hike up Lassen Peak, as I had learned the trail was not yet open. Even the main park road at Lassen was just recently cleared of snow and open to the public. At least the hot sun is melting the snow faster in Lassen now, even if the Hat Creek rim will be scorching.

After a nap in the cool shade near the falls, I made a last stop at the store in the park and around 6:00 headed SE along Burney Creek to catch the PCT where it crossed Hwy 89. I made just 4 miles, meeting nobody on the trail and stopped for camp near mile 1419.

About the "Halfmile" maps and PCT trail milages:

The trail mileage I will use is off the "Halfmile" series of maps. This is the PCT trail milage from Mexico (mile 0) to Canada (mile 2654). Mr. Halfmile (a veteran PCT hiker) created these map sheets by placing a GPS corrected track of the PCT on a topographic base and annotating these maps with information regarding resupply/angel stops, water availability, trail and road crossings of the PCT and some camping info (like bear box locations) and Ranger Station locations. The maps, (at a scale of 1/2 mile to the inch) can be printed for the cost of your paper and ink. I used these maps all the way on my hike of the PCT portions, except the occasion when a section of them did not arrive in my resupply box. I found them to be very accurate and easy to use and did not carry any of the other supplemental guides that are available. I may have benefited from the info in the many guides and atlases that are out there, but was able to navigate and successfully plan ahead with no more information than that provided on these maps.

About the USFS/NPS/BLM/PCTA -- PCT MAP:

I also carried the USFS "official" PCT maps (Lengthwise folded sections at 1 mile to the inch) This series, which is not complete in Northern CA, allows one to view more of the area around the trail and get a longer look along the course of travel, compared to any 1/2mile to inch series maps. For easier reference, I annotated the Halfmile PCT milages on these maps in pen about every 5 miles or at trail junctions ect. The trail is FAR more accurately placed on the Halfmile maps however, since they are constrained by the GPS track.

To follow my route, it is very simple to call up the Halfmile maps and view them in a separtate window (www.pctmap.net) or Postholer has a google map application linked to the journal pages allowing you to do the same thing within this program. The PCT track on the google map base in Postholer does differ slightly at times from that found on the Halfmile maps. I usually put each days ending camp location on the Postholer Google map and it will show up with with a round blue circle with a J ( not sure why a J) , on the map (click on the coordinates). When I am off the PCT, I usually am still on the Halfmile map coverage (if not, you will find most day ending locations on the postholer map on each days' journal page). It is also possible to view the trail trace and location plot on a satellite image base on the postholer map just as you could do if in Google Earth.

I will have the photos I took along with captions, viewable in my Picasa public albums. Bring Picasa up with this link and view the photos as you go through the Journal entries. http://picasaweb.google.com/picksupstones2010

There are 5 albums with photos, keyed to the PCT (Wilderness Press) guidebook sections.