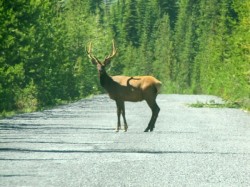 After many months of planning and training, we are coming down to the wire on actually hitting the trail. We have been anxiously watching the snow levels from Mt Adams through the Goat Rocks Wilderness and hoping the snow will magically melt off before our departure date of July 31st. Yesterday my husband and I drove up Rd 23, through RD 2329, to Rd 5603 where the PCT crosses the road. It was dry, no snow, clear as a bell at Potato Hill. Saw a beautiful elk with a full rack standing on the road. Photo was taken on full zoom through the windshield. Only got one shot off before he ran off into the bushes. On our way back, we saw a backpacker who we stopped to talk to. He tried to start a couple of days ago at the same place we are planning to start at and ran into a lot of snow. He didn't want to deal with the snow on the PCT so decided to hike the forest roads instead. He also plans on diverting around the Goat Rocks section too. He strongly recommended crampons and ice axes if we were going to tackle the Goat Rocks. I tried to get an answer from him on how deep the snow depth was but he kept skirting around the topic. Not sure why.

I have been checking various trail reports and forums on snow levels and viewing the photos that people post. Yes, people are day hiking into Goat Rocks and sitting on Old Snowy from the westside (Packwood Lake) and taking pictures, but I have not read one report yet about getting there from the south side on the PCT. Apparently Goat Lake is still snowed in.

I am planning on doing a day hike this week on the trail that we are hopefully starting on to see for myself what the snow level looks like. Depending on what I find, I may change our departing location to the Killen Creek Trailhead instead. There were a ton of cars at the trailhead yesterday, although nobody was around at 4:30pm to talk to about the snow they encountered.

Our goal is this: Start at Rd23 at Mt Adams, and go north, emerging at Stevens Pass three weeks later. Four of us will be starting with two dropping off at White Pass. We know about the detour north out of Snoqualmie Pass and haven't decided which detour to take yet...

Because of all this snow stuff, my husband is strongly recommending that I invest in a Spot II so he can keep track of us. Yikes, they are expensive. Sigh, another gadget to carry, like my pack isn't heavy enough!