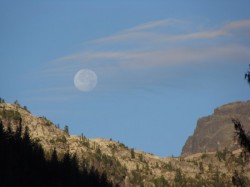 Setting moon over the ridge

Woke up to a gorgeous morning and a setting full moon over the top of the mountains. Just a whisper of clouds threaded around the moon, a precursor of the change of weather that would happen later in the day. We made it to Deep Lake with Cathedral Peak towering overhead at noon. The wind was increasing in strength and the clouds were starting to thicken. I pulled my solar panel out hoping to charge my cell phone as I would need it in a couple of days to call our friends for pickup at Stevens Pass. No luck with the charging - the clouds came in swiftly and the temperature started to drop. We packed up quickly and started the afternoon uphill session. By the time we reached the ridge, the temperature had radically dropped and raindrops started falling. We pulled out raingear, put on the pack covers and headed down the other side. It was getting colder by the hour. Based on my temperature gauge on my pack, it dropped 20 degrees in the afternoon. We reached Swift Creek, which is defined as a "difficult ford" and saw the two places that had logs over the rushing water that we were to cross on. I went first and crossed on the logs and quickly found out how slippery the large rock was that the logs were jammed up against. It should have been a warning and I should have been paying attention. Jingle Bell and I both made it over both sections of Swift Creek, but it was where the very last piece of getting back on the trail was where I stepped on a flat rock and my feet flew out from under me and the next thing I knew, I was clinging to the edge of the small waterfall trying to find a foothold with water pouring over me. Jingle Bell wanted to pull me up but I was concerned that I would pull her over, especially with the slippery rocks. I clawed my way back up and over the ledge and stood there with my heart pounding in my throat. All I could think of was I was so glad I had put my fanny pack in my backpack earlier and my phone and camera didn't get damaged. Thank goodness my sleeping bag was wrapped in plastic and the pack cover was on. After that little episode, I gingerly made my way to another spot and crossed over to the trail. By now it was raining pretty steadily, but I was already thoroughly soaked. We talked about hiking as far as we could the rest of the late afternoon but had already covered 16 miles and wasn't sure where we would find a campsite, so when a small campsite appeared about a mile from Swift Creek, we decided to make camp and get warmed up. We squeezed the two tents in and got in. I changed out of my wet clothes into my long underwear and climbed into my sleeping bag. After getting warm enough to make a bit of dinner, I opened the tent fly enough to set my stove out and heated some water. Went simple and made mashed potatoes and a cup of tea. I put the bag of mashed potatoes down on my feet inside my bag and it did a fantastic job of warming the bag and the feet! And then I ate it. Yum, yum! Jingle Bell started saying how she had to go potty but didn't want to go out in the rain and get her stuff wet again. So what does she do? Strips down to her birthday suit, clamps on a hat and runs into the woods and does her business! It was pretty funny!