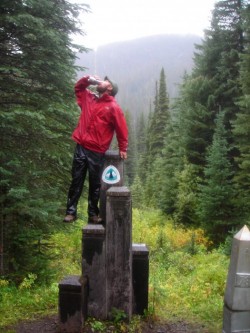 PBR on the Border

Washington was rough and rainy. The views when you could see them were great but the views were not seen often. I missed all views of Glacier Peak and went to bed wet and would wake up wet for several days in a row. The rain got me down but then I reminded myself that hiking is my choice and I needed to stop being a baby. I still was grumpy about the weather but I was so close that I didn’t care.

Stehekin was a great stop with two of the best eating places on the trail in my opinion. The Bakery lived up to the hype that everyone going south had made it out to be and the ranch was great. I ate enough beef in one night to equal the body weight of a calf. The guests were terrified. I was able to stay for free indoors by sleeping in the hotels upstairs lobby. Cubby scouted it out and then showed it to me. Woodward and Smokey the Beard joined later in the night. We met a 1977 thru hiker named Mike (Seattle Spikers). He told us about his hike, which sounded much more challenging that ours.

I hung out with Boston and Cubby and had a good time B.S.ing with them. I bumped into them almost daily from White Pass to the monument at the end of the trail. Congrats to them on completing the Triple Crown(AT,CDT,PCT).

The sun came out on Sept 11 and I hiked within two miles of the border with Boston and Cubby and camped. All of our paces slowed due to the massive amounts of Berries lining the trail. It was like watching three bears move through huckleberries my hands were blue along with my mouth. September 12th I arrived at the border after a sleepless night due to all the excitement of actually completing this trail. I arrived at the monument as Boston and Cubby were taking the last of 200 pictures, they offered to take my picture and I really appreciated it because I was wondering how I was going to get any pictures of me at the monument. We all hiked over the border together but I was hungry so I hurried along to Manning Park, Boston and Cubby arrived about five minutes later. We ate breakfast and I jumped in the pool. Later I met their good friend John (Sandman) who immediately had me crying from laughing so hard from him telling a story about getting a cinder block dropped on his head and his outpatient brain surgery. Thanks John for breakfast, dinner, and a ride into Vancouver Canada.

The North Cascades are massive with glaciers and snow clinging to the high peaks. I only had some short teaser views of this area along with most of Washington but the jagged Cascades were still incredible.

Yes I would do it all over again, I didnt figure out any deep new meanings to life, or whats next. I do know that my mind was completly blank for hours almost every day and that it was the most incredible thing I have done in my life. I met some great people both hikers and non hikers. The trail was great and I already miss it but it feels great to be back with friends.

Thanks to all the support along the way.

P.S. I had written up a huge final entry that was deleted when I went to post it so this is the short version.