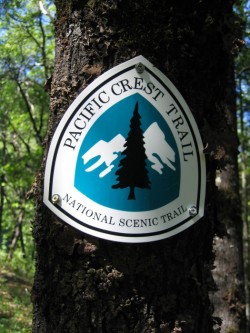 Just to clarify on some questions I received from my first post, I definitely am NOT a PCP addict. Its PCT not PCP.

For those who are perhaps unfamiliar with the PCT, allow me to clarify. The Pacific Crest Trail is a long-distance trail for hikers extending 2,660 miles from Mexico to Canada along the rugged and often remote crest of the Sierra Nevada and Cascade Range. The trail is marked and maintained through 3 states, 8 national parks and monuments, 5 state parks, 24 national forests, 25 wilderness areas, and 3 BLM districts. You can check out a google map of the trail by clicking on the link to your right. Due to the combination of its scenery and easy to moderate trail-grade, in my opinion, the PCT is the most enjoyable long distance hiking trail in the world.

Portions of what is now the PCT were under construction as early as 1915. In 1968, Congress passed the National Scenic Trails System Act. The Act names the Appalachian and Pacific Crest Trails as the first two national scenic trails. The US Forest Service coordinates the overall management of the PCT. The National Park Service manages the trail within national parks along its route.

The PCT is more than twice the length of the highways that travel the same route from south to north; indeed, if you wanted to drive a distance equivalent to the trail, you would have to take your car from Los Angeles to Baltimore. In 2009, approximately 500 thru-hike permits were submitted. About half of those intended to hike a large section of the trail. The other half start at the border intending to complete the whole trail within one season. The completion rate ranges from 60% in an exceptionally good year to about 10% for a bad one. With some careful preparation, bone-headed determination, lunacy, and a heaping tablespoon of luck, I hope to be one of the fortunate few capable of saying they've completed this wonderful trail. Again, I am not a PCP addict.