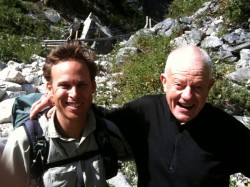 Water Treatment:
Many of the long-time PCTers, including Billy Goat and Scott Williamson, don't use any type of water treatment. They simply use their own discretion on which water source is safe enough to drink. With that said, they have both been hit by water-borne pathogens. I also subscribe to this drink-with-discretion approach. However, I've recently became much more weary after contracting water-borne pathogens during my thruhike, twice. To be honest, I was being cocky the first time I became sick. I was carrying antibiotics to treat giardiasis on the trail and drank some real nasty cow shit water. After being sick for the first time, I'd treat the water if there was any doubt. The second time I became sick, my steripen batteries unknowingly went dead so I drank some really nasty untreated water with lots of precipitate, right in the middle of cow country. Here's how I treated my water during my thruhike:

Aquamira - I carried Aquamira from Mexico to Canada. Chemical treatment, such as Aquamira or bleach, is the cheapest and lightest water treatment available. Aquamira essentially is the same as bleach without the bleach-flavor. In fact, a popular Aquamira substitute that hikers use is bleach. Bleach has the advantage of being much cheaper and easier to find on the trail. Bleach is more concentrated than Aquamira. You only need to add a drop or two per liter for bleach, whereas you'll add 14 drops per liter of Aquamira. Therefore, bleach is slightly lighter than Aquamira. Both chemical treatments take 20 minutes. So, if you can handle the slight taste of bleach in your water, then bleach is a better option than Aquamira. After treatment it's a good idea to open the container and allow the volatile toxic compounds to breath off for a few minutes. Adding drink mixes helps disguise the bleach taste. Bleach is rarely available in containers less than a gallon. However, you can take a few milliliters, and leave the rest in a laundromat. I'm not a big fan of chemical treatments because I think they might destroy your gut microflora. With that said, I think effectively destroying gut pathogens is far more important than balancing your microflora.

Steripen Adventurer Opti - I bought one of these UV lights in Tahoe and used it as my main water treatment until Canada. I still carried Agua Mira as a back-up, just in case my Steripen failed. I preferred my Steripen mainly because it requires only 90 seconds, compared to the 20 minutes required for chemicals. This is critical when you're trying to keep your flow without taking long breaks. Instead you can camel up and avoid carrying large amounts of water. With the Steripen, no chemicals are added so you can enjoy the taste of fresh spring water without any minerals filtered out. Steripens have highly mixed reviews. Some people love them and report no problems. Others have completely lost confidence in them since they sometimes mysteriously stop working. If the Steripen malfunctions during treatment a red blinking light will flash. I think the major cause is dead batteries. Steripens use a nonstandard battery size (CR123). I tried two different brands of batteries: Enercell and Duracell. Both were lithium. The Enercell batteries lasted only 8 days, while the Duracells lasted over three weeks. This length of time will vary depending on how much water you're drinking. For example, I drank up to 6 liters per day in hot NorCal, while consuming only 2 liters per day in cold and wet Washington. I always carried at least one set of spare batteries. Since you won't find these batteries at most stores, you will need to send yourself fresh batteries either in your resupply and/or bounce box. Even when the batteries were working, the Steripen may still occasionally malfunction. You must assure the blue UV light turns on. If the sun is too bright you won't see the blue light. So treat the water in the shade. The UV light will only turn on if the sensor is submerged in water. This is to prevent irradiating yourself. If the UV light doesn't turn on, assure the sensor is submerged. If it's still not working, take the batteries out, shake the batteries, replace the batteries, and give the Steripen a few Fonzie taps. Hey, it worked for me. If it's still not working, try putting in your spare set of fresh batteries. If you buy a Steripen, my advice is to buy it several months before your thruhike to fully test it and make sure you have a good one that you trust.

Antibiotics:
Tinidizole - (2 doses, 4 pills per dose, 2 grams per dose). Before I embarked on my thruhike, I emailed my doctor. I told him that I was thruhiking the PCT and about 40-60% of the thru-hikers get giardia (this statistic is unknown). Since I would be in the wilderness, I requested a prescription of Flagyl (also known as Metronidazole) to treat the giardiasis on the trail. He replied that he didn't prescribe Flagyl for Giardia, instead he gave me a prescription for a newer antibiotic called Tinidizole. The advantage of Tinidizole is that you take four pills once. It clears your system within an incredibly fast 18 hours. In contrast, Flagyl is taken over several days. If I were to do another thruhike, I would definitely carry these antibiotics again. If I didn't have these antibiotics on my PCT thruhike, I don't know how long I would have been off the trail or how much weight I would have of lost. My doctor gave me two doses and I used both. I've heard you can buy Flagyl over the counter in pet stores, but I haven't investigated this matter. I should note that there's a variety of water born diseases including Cryptosporidium. Tinidizole may or may not treat these other infections.

Food:
Food should be high in calories and rich in protein. You will crave salt that is rapidly lost when sweating. Dehydrated backpacking food usually lacks Vitamin C, so you'll need to either add some fresh fruit in town and/or add some Vitamin C tablets. If you have too much of one specific type of food, you'll quickly become very tired of it. Variety is key. For example, I would buy one of each of the different flavors of protein bars. I went cookless meaning I didn't carry a stove. Most people shudder when I tell them this, but I never missed my stove. Not one single day. I found it refreshing not to cook. It was partly laziness, but it also freed up my day allowing more time to hike. In fact, towards the final thousand miles I found that several thruhikers were converting to a cookless approach. The longer hiking days were just not conducive for the time it takes to cook.

There are two general common strategies for resupplying: sending yourself boxes and buy-as-you-go. I did a combination of the two. The stores are typically well stocked with salty and sweet high-calorie snack foods. However, these foods are typically sugar-rich rather than protein-rich. Consuming high amounts of sugar will cause large fluctuations in blood sugar resulting in sugar crashes. To avoid these sugar crashes I ate mostly protein-rich caloric food, such as protein bars. Protein bars were my most commonly eaten food. Most of the stores stocked these protein bars, such as Cliff bars and Power Bars. However, they were typically overpriced (over 2 bucks per Cliff bar) and limited in variety. Sending yourself resupply boxes allows for a healthier diet with more variety. My resupply boxes were topped off with a wide variety of brands and flavors of protein bars. These bars were purchased in bulk so I saved a little money there.

Nido & Spirutein Protein Shake - Every morning for breakfast I drank a protein shake, mixing Nido dried milk with Spirutein protein shake mix. An empty small plastic Skippy peanut butter container worked perfectly. Nido dried milk is the only type of dehydrated milk I know that still contains the milk fat. You can find it at Walmart in the Latin foods section. Spirutein is a plant based protein shake. You can purchase it on Amazon. I like Vanilla. Lately I have been experimenting with Whey Protein shakes. Whey protein comes from cow milk. It is argued that whey protein is better for building muscle than Soy and plant based protein. The idea is that the amino acid content in whey protein is more suited for building lean muscle tissue compared to soy protein. With my protein shake I would take a multivitamin and a fish oil pill every morning. All of these items would be very difficult to find along the PCT, so adding them to your resupply box is ideal.

For dinner I had three different recipes on the menu: black bean soup, pinto refried beans, and (my favorite) curry lentil soup. These are made by a company called Will-Pak and sold by another company called Taste Adventure. I'm not a big fan of their sweet cord chowder or split pea soup, but I normally don't like those soups. For the PCT, I bought three 10lb bulk bags and I rotated these dinners every three days. This provided me with about 125 dinners. By buying in bulk all these dinners cost less than 100 bucks, which I thought was extremely inexpensive for 125 meals.

Electrolyte drink mixes - electrolytes include salts. Drinking electrolytes is a better method of replenishing salts compared to eating salty foods. Adding drink mixes to your water will make you want to drink more allowing you to stay hydrated, which is extremely important.

For dessert, I ate various sweets. One of my favorites was Panda Licorice Chews. I give credit to fastpacker Adam Bradley for this recommendation. He was introduced to these healthy candies by Scott Williamson. I liked Raspberry flavor. Having a bunch of calories before going to bed is a great way to gain back a little lost weight. However, if you eat too much sugar you might have problems falling to sleep. The Panda Licorice Chews are sweet but relatively low in sugar. They taste a little different, but I dig them.

Travel sized toiletries - For travel-sized toiletries such as toothpaste, floss, and sunblock Minimus is your one stop place. You may be able to find many of these travel-sized items for less expensive prices at Walmart or some similar discount store. Along with travel-size deodorant, another way to stay fresh is by adding a pack of Listerine Breath Strips. A pack of 50 strips weighs less than a half an ounce. They melt in your mouth. The Travelon Travel Fresh Sheets are a very lightweight option for backpacking soaps. For shaving cream I used the Travelon Shaving Sheets. Rub the sheets in your hands with a little water and you have shaving cream. I don't recommend the Travelon hair conditioner because it doesn't rehydrate very well.