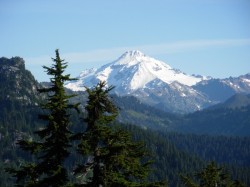 There was a hard freeze during the night and it was hard to get up. I had camped in a spot I thought would get some morning sun. But, true to the nature of Washington, the large trees on the ridge impeded the light. The sun seems to always make excuses for uninterrupted, warm shining--it is always wan or obscured. It seems that all of my campsites recently have been in the bottom of canyons with no chance of sun until it is too late in the morning. Enough whining....

The saga of the camp shoes continues. During a dramatic climb to the high country a day hiker asked me if I was the one missing the sandals. He said that Chance was carrying them and was getting frustrated about the burden. He must have passed the turnoff to Pear Lake while I was out of sight camping at the lake. I should have left a note on the trail. Now the sandals had embarked on a PCT adventure of their own. How to catch up with Chance, a speedy hiker? Later, three women day hikers also greeted me with the same information, except that Chance was even more frustrated. I tried to send vibes out for him to just leave the sandals on the trail where I could see them and pick them up.

I camped at Indian Creek trailhead--the start of the defunct Glacier Peak Wilderness detour. I left a note for other hikers to tell Chance to abandon the sandals and I would find them.

Within 5 minutes after I entered the Glacier Peak Wilderness I saw a bear eating berries next to the trail, a peregrine falcon swooping down overhead and a grouse on the trail. This was the hopeful end to the wild animal sighting drought so far on the trail. I watched the bear, who was unaware of my presence, for several minutes. I started walking and making noise to warn it I was coming--the only song that came to mind was the one from Monty Python's "I'm a Lumberjack and I don't care" skit about the lumberjack wearing high heels and hanging around in bars. Why?? It did work and the bear took off. Another goofy trail moment.

I tried to implement bear country protocol by cooking in the meadow far away from my campsite. but my resolve didn't last long because of the copious amount of mosquitoes. Let the bears come!!!