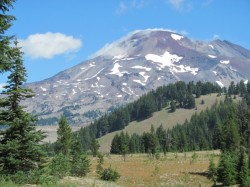 Fire and Rain or not

I got a late start since I needed to get more info on the fire situation. The one to the west of the Three Sisters is apparently far enough to the west to not affect the PCT. I decided to head out toward the next highway - McKenzie Pass.

It was cool and cloudy and very windy most of the day. That made for good hiking but not stopping or resting. Crossing the Wickiup Plain was just like roaming through Grand Park in Rainier Nat Pk. I thought of the Dancing with Wolves movie. Then there were several meadows just exploding with lupine. Before the cloud cover really lowered, there were also very nice views of South and Middle Sister.

Several people passed me right out of the gate this morning and then Pony caught me at a water stop.

I wanted to get closer to McKenzie Pass today but I was fried by 4 pm and the sky was really looking threatening. At last I am fed, watered, and DRY and WARM in my tent - dry and warm being the key words.

Also, I found a pair of boots on the trail but after the debacle and "boot war" from last year; I just left them where I saw them.