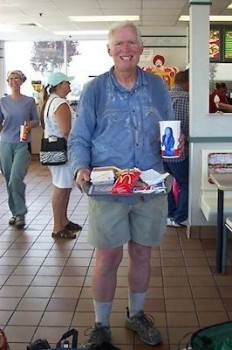 At the Cajon Pass McDonalds 2004

A new set of hiking poles. Some socks. And if I make it to Washington, some rain pants. I have everything else I need.

This is where I am one day after deciding to head north from Campo in early April. Again. I attempted a thru-hike in 2004 and got as far as Donner Pass. I hiked again in 2008 and got to Cajon Pass. How far this year? I just do not know. But I have to walk.

Jeff took this picture. I met him and his wife Chipper (That's Chipper on the far left.) on the trail in 2004. We leapfrogged often, and were sometimes in towns at the same time. Though we have had little contact, we have remained friends since then. That's the way it is with The Tribe.

I have a saying on my blog: "You have to love hikers. It's a rule." It is a concept I got from Donna Saufley. She loves hikers with every element of her being. Regardless of the hiker.

What I leave behind when I walk is something very fine: a home in Oakland with a a dear friend and a vegetable garden that will be tugging at my heartstrings as I walk. But where would the value be if there were not costs?