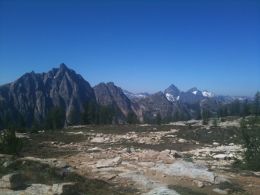 Rainy Pass to the Canadian border

happy trails to you!
Skyward