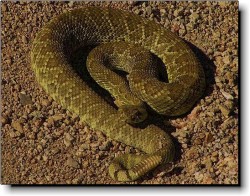 Julianne, the friend of ours (same one who did the Susan B. Komen 3-day walk recently) was over for dinner a few nights ago. She was very interested in our upcoming PCT adventure. One question she asked us was "What do you fear the most on this trip?" There was a long silence - a very long silence as we thought about this question. Of course there are things to fear when on the PCT, but what are they and what do we fear the most?

It got us both thinking ...

There are plants and animals like rattlesnakes (especially the mojave green!), scorpions, poison oak, bears, and humans. And the acts of nature or circumstances like lack of water, extreme heat, snow blizzards, crossing raging rivers, or not having an important resupply box arrive.

Many people are concerned about running into illegal aliens near the border. No problem for us. We see them and talk to them all the time.

Rattlesnakes? We run in the nearby lagoon and occasionally see them on the trail. We just keep our eyes out for them and provide a wide berth. Rattlesnakes don't want anything to do with a big human, trust us. Just don't step on them. We have only seen the most common Western Rattlesnake. Most of the rattlesnakes encountered have a hemotoxic venom - a bite will destroy tissue, disrupt blood clotting etc. The Mojave Green rattler is a much less common variety but much more venomous. Their venom contains a neurotoxin (which affects the nervous system). This can affect respiration and can lead to death. Fortunately the Mojove Green is one of the least aggressive and less common rattlesnakes. We don't want to scare anyone out there as there are very few rattlesnake bites in Southern California - usually they happen to a male age 22-26, and usually his last words before being struck are "Dude, hold my beer and watch this"!

All rattlesnake bites should be considered life-threatening and one should seek medical attention as soon as possible (yes, we would hit the SOS on the SPOT). If you hear this sound , slowly back away and give them a wide berth. For more rattlesnake info (and first aid), see this page.

Bears usually just want your food. If it comes to push vs/ shove, give up your food. Jack (and Evie) lost their food once to a bear in Little Yosemite Valley (long before bear canisters). They went hungry for a day.

Lack of water in the desert section is a true fear. If you have ever been out there in 100 degree heat with little water, you know. You can die. Trail angel water caches are a God-send but can you bet your life on one? Yep, this is a true fear. Some people require more water than others. Barb sucks up water like a parched sponge and Jack, well maybe he was a camel in a previous life. We will be glad when we get through this desert section.

Snow blizzards and raging rivers just require common sense. Not long ago a PCT hiker lost his pack, everything in a raging river 28 miles from civilization (see The Kern ). Remember, the rivers don't flow as fast in the mornings and one should take the time to scope out the best crossing.

So we come to our greatest fears, trip ending fears. Personal injury or maybe even mental breakdown - it can get tough out there. Break an ankle, blow out a knee, dislocate a shoulder. The best way to avoid these is to have the right equipment, avoid pushing the envelope, eat sufficient food, stay hydrated, and keep a positive attitude.

An interesting side note to all of this is that so many people including Barb's mother asked us if we were taking a gun along with us. If you have hiked the PCT or are planning on it, you will hear this common question "Are you taking a gun?" Why do people think one needs a gun? We don't even own guns and geez, they would be so heavy, with the ammo and all.

Well, there was one time when a gun would have come in handy. We were on a backcountry ski trip near the southern border of Yosemite when we were chased around by this giant, crazed marmot. Yeah, a really, really, huge marmot! We have pictures to prove it (see above)! Watch out Mr. Marmot, next time we pass through your area we are bringing our posse for protection.